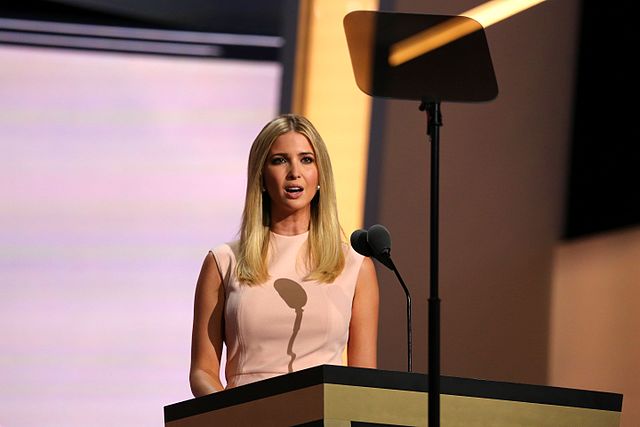 Members of Congress from both sides of the aisle, as well as various "watchdog" groups, are up in arms over $99 textured open-front cardigans, $125 suede slingback pumps, and $98 pebbled leather crossbody bags. Yes, really.

In an appearance on Fox and Friends, presidential adviser Kellyanne Conway made the mistake of doing the obvious: When the subject of Ivanka Trump's eponymous clothing line came up (because Nordstrom's department stores are dropping Ivanka's products), she spoke supportively of her boss's daughter: "Go buy Ivanka's stuff, is what I would tell you .... I'm going to give it a free commercial here, go buy it today."

US Representatives Jason Chaffetz (R-UT) and Elijah Cummings (D-MD) of the House Oversight and Government Reform Committee, signed a letter seeking an ethics investigation. Citizens for Responsibility and Ethics in Washington (CREW) filed a complaint with the Office of Government Ethics. The White House says it has "counseled" Conway.

Talking up a presidential family member's business when it's in the news is an ethics violation? My hypocrisy meter is pinging in the red zone right about now.

Members of Congress continually vote to fork over billions of dollars to companies whose executives make large campaign contributions and whose lobbyists buy lots of drinks and steaks. When they're done being in Congress, they draw lavish salaries from positions on the boards of, or as lawyers or lobbyists for, those same companies.

Ditto former presidents and former cabinet officials. Does anyone really believe that former Secretary of State Hillary racked up $5 million in speaking fees in 15 months because she's a great orator with wonderful, innovative ideas? She knocked that kind of money down as payment for past favors and, as a prospective president, down payment for future ones.

Sure, the Beltway establishment occasionally offers up a human sacrifice as proof of its moral rectitude. Former US House Speaker Newt Gingrich (R-GA) paid a $300,000 fine and eventually resigned when charged with 84 ethics violations. Former US Representative Randy Cunningham was sentenced to eight years in prison for accepting millions of dollars in bribes. But they're the exceptions, not the rule.

If I had to guess, I'd guess there will be plenty of actual White House corruption to complain about in the coming four years. Going after Kellyanne Conway for saying nice things about Ivanka Trump's clothing line is a cheap shot from people who do far worse every day.

Related Topic(s): Corruption; Ivanka Trump; Kellyanne Conway; Nordstrom, Add Tags
Add to My Group(s)
Go To Commenting
The views expressed herein are the sole responsibility of the author and do not necessarily reflect those of this website or its editors.