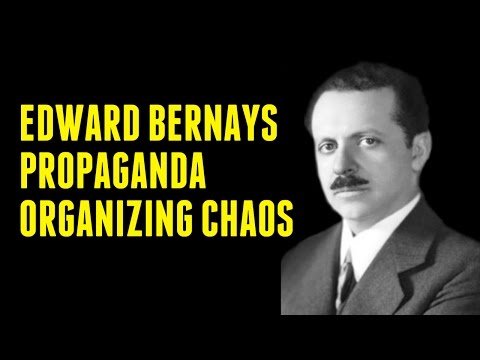 In today's episode of COVID fakery on rye and hold the apocalypse, we begin with a bevy of quotes from Edward Bernays (1891-1995), the acknowledged father of modern public relations, aka propaganda. I include his statements as a warm-up backgrounder

"The engineering of consent is the very essence of the democratic process, the freedom to persuade and suggest." (1947)

"When I came back to the United States, I decided that if you could use propaganda for war, you could certainly use it for peace. And 'propaganda' got to be a bad word because of the Germans using it, so what I did was to try and find some other words. So we found the words 'counsel on public relations.'" (date unknown)

"When Napoleon said, 'Circumstance? I make circumstance"' he expressed very nearly the spirit of the public relations counsel's work." (1923)

"Domination to-day is not a product of armies or navies or wealth or policies. It is a domination based on the one hand upon accomplished unity, and on the other hand upon the fact that opposition is generally characterized by a high degree of disunity." (1923)

"The public relations counsel, therefore, is a creator of news for whatever medium he chooses to transmit ideas. It is his duty to create news no matter what the medium which broadcasts this news." (1923)

"The conscious and intelligent manipulation of the organized habits and opinions of the masses is an important element in democratic society. Those who manipulate this unseen mechanism of society constitute an invisible government which is the true ruling power of our country. We are governed, our minds are molded, our tastes formed, our ideas suggested, largely by men we have never heard of. This is a logical result of the way in which our democratic society is organized. Vast numbers of human beings must cooperate in this manner if they are to live together as a smoothly functioning society." (1928)

"Propaganda is the executive arm of the invisible government." (1928)

"If you can influence the leaders, either with or without their conscious cooperation, you automatically influence the group which they sway. But men do not need to be actually gathered together in a public meeting or in a street riot, to be subject to the influences of mass psychology. Because man is by nature gregarious he feels himself to be member of a herd, even when he is alone in his room with the curtains drawn. His mind retains the patterns which have been stamped on it by the group influences." (1928)

The news heads and the talk show heads and the sports heads and the advertisers and bureaucrats and politicians and public health flacks and celebrities are assuring television viewers, with no shame: We're all in this together. Over and over. Night and day. On every channel.

Related Topic(s): Advertising; Devastation; Manipulate; Manipulation; People; Politicians; Propaganda; Public, Add Tags
Add to My Group(s)
Go To Commenting
The views expressed herein are the sole responsibility of the author and do not necessarily reflect those of this website or its editors.