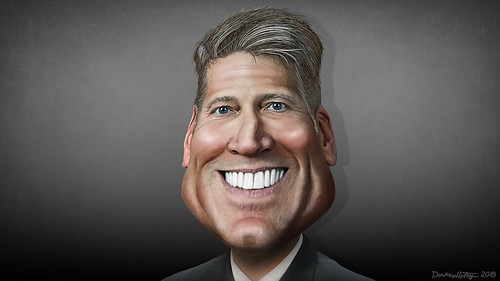 The first time I had any doubts about Dr./Admiral (Admiral/Dr.?) Ronny Jackson was also the first time I had any idea who he was -- the presidential physician. That was in January when Jackson, after what he said was a thorough examination of Donald Trump proclaimed the clearly overweight, often confused Dotard-in-Chief to be in "excellent" health.

Indeed, everything about Trump's health was seemingly "excellent," or "very, very good." "Excellent," Jackson kept saying over and over.

Trump even did "exceedingly well" on his cognitive test, the doctor said. "I have absolutely no concerns about his cognitive ability," Jackson said at the time, making a point that Trump scored 30 out of 30 on a cognitive assessment test. Funny, I mused at the time, I don't remember ever hearing a presidential physician feel the need to provide such detail on his patient's cognitive abilities. Maybe it's just me, I thought. Maybe I just never paid that much attention before. But Jackson did make sure to note that Trump is "very sharp, and he's very articulate. ."-."-. Very, very sharp, very intact," Jackson insisted. The admiral/doctor said he "found no reason whatsoever to think that the President has any issues whatsoever with his thought process."

Really? How could this stirring physical and mental report be true, I wondered, knowing as we do Trump's regular diet of fried chicken, Big Macs, red meat, Diet Coke and ice cream, his lack of any physical activity other than swinging a golf club and tweeting, the fact he is borderline obese and takes medication to lower his cholesterol, his habit of routinely contradicting himself and his resistance to reading or to facts or to anything that conflicts with what he prefers to believe?

"Good genes" was the doctor's diagnosis. In fact, "incredible genes."

Kissing the boss's butt was my conclusion.

It gives me no pleasure to say it appears that I was right. As the admiral prepared to go before Congress this week to answer questions about his qualifications to head the Department of Veterans Affairs it became immediately obvious that he had none, except for saying a lot of nice things in public about Trump, having a cool military title and looking good in uniform. That's a trifecta for promotion to Cabinet status in the Trump White House, a disaster in real life.

Unfortunately for Trump and the doctor, but fortunately for millions of veterans, others took the job of vetting a potential Cabinet member more seriously than did the White House. The main question: Can this guy manage the second largest department in the federal government even though he has no experience in that area? But before he even got to face a congressional committee to answer that question, Jackson withdrew his name from consideration amid stories of him drinking on duty, indiscriminately dispensing pills and overseeing a hostile work environment that curried favor with people in power and had staff members operating in fear of retribution.

Another one of "the best."

I started running through the names of Trump's Cabinet members trying to decide which one troubled/angered/disgusted me the most and was stunned when I realized RIck Perry wasn't anywhere near the top of the list. I mean, the guy wanted to get rid of the Energy Department when he was running for president, then took the Cabinet post from Trump without realizing it regulated nuclear arms and energy.

But the former Texas governor has some stiff competition in what surely is the worst Cabinet and sub-Cabinet in modern U.S. history, perhaps all time. For sheer arrogance -- strutting about acting as if they know what they are doing, living large on public tax dollars, ignoring the missions of the agencies they are supposed to lead and destroying the foundations on which this nation was built -- the group cannot be beat. It is a perfect reflection of Trump, all con, all greed and incredibly cruel to boot.

I'll spare you the whole, pitiful list. But briefly "

That's enough. Just to return to the admiral for a minute. The depths of his self-serving smarminess should have been evident when he "examined" Trump and declared, "I think he will remain fit for duty for the remainder of this term and even the remainder of another term if he is elected."

Sycophancy, as Team Trump demonstrates, can be contagious. It can also be dangerous to careers. The doctor should have known.