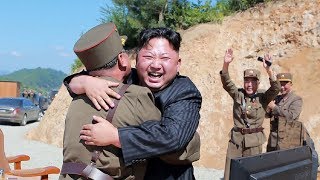 Welcome to reality. North Korea test fired an intercontinental ballistic missile yesterday that according to them could reach Alaska and Hawaii.

The initial US response came shortly after the test was verified by General Vincent Brooks the top US general in South Korea. Brooks said, "Self -restraint is the only thing stopping war in Korea" [1] . He condemned the ICBM test by the North as a violation of UN resolutions.

Shortly thereafter the US and South Korea conducted a "joint missile exercise" off the South Korean coast as a warning to the North with the general saying, "It would be a grave mistake for anyone to believe anything to the contrary".

That would be laughable if it weren't so serious.

To any neutral observer it becomes apparent North Korea has developed its missile and nuclear arms capability as a deterrent against a US attack.

That's what nuclear arms capability is intended for. Especially against an aggressive US war machine that has repeatedly attacked non-nuclear regimes it knows can't retaliate against the US.

Now it's been said MAD, mutually assured destruction-the cold war reality accepted by the US and the Soviet Union that any nuclear strike against the other would bring an immediate retaliatory strike which essentially prevented a nuclear war-no longer applies. That the use of tactical nuclear missiles has made MAD obsolete. Also first strike capability has become so advanced the devastation to the other would be so great they wouldn't be able of send a retaliatory strike.

Well madness may have gripped US war planners considering the many provocations against Russia and China that has advanced the doomsday clock to two and a half minutes to midnight.

Luckily those US provocations haven't resulted in the unthinkable.

But let's gets back to North Korea.

Of course in the US North Korea is demonized, characterized as an aggressive enemy and Kim un Jong is its unstable leader who is provoking the situation. Yet its North Korea that has asked for a final peace treaty ending the Korean War that only ended in an armistice in 1953 and the US has refused.

So the reality is distorted. It's the US that continually conducts war games off the Korean peninsula, has threatened to send an "armada" against the North and even openly considered assassinating Kim.

What seems clear is North Korea won't be cajoled by US provocations. Sure the North has the capability of hitting Seoul a mere 40 miles away with conventional weapons that could destroy the city. The same for Tokyo with similar weaponry, particularly in retaliation against any US attack.

Retired. The author of "DECEIT AND EXCESS IN AMERICA, HOW THE MONEYED INTERESTS HAVE STOLEN AMERICA AND HOW WE CAN GET IT BACK", Authorhouse, 2009
Related Topic(s): Korea; Reality, Add Tags
Add to My Group(s)
Go To Commenting
The views expressed herein are the sole responsibility of the author and do not necessarily reflect those of this website or its editors.