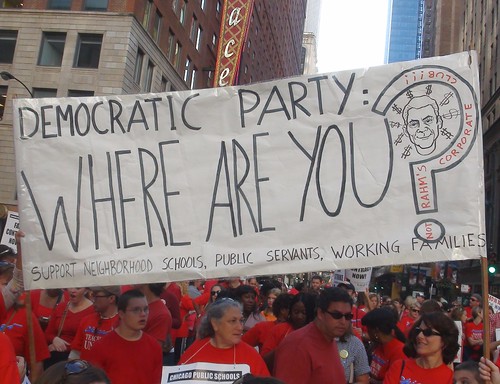 'Democratic Party, Where Are You?'
(Image by firedoglakedotcom)   Details   DMCA

In the Year Ahead, Taking Down the Democratic Party Is the Most Important Task

It is difficult to have optimism for the future when you live in the United States. A large section of the population is completely alienated from the truth about the unjust system that dictates their lives. Corporate media lies protect a class society which is dedicated to the impoverishment of over half of the planet. The violence of white supremacy, endless war, and economic catastrophe is coupled with the ongoing destruction of the natural world. Michelle Obama recently expressed deep unity with the "values" of George W. Bush and her husband followed suit by expressing that any woman, regardless of whether they sport a pro-war and pro-austerity agenda, is equipped to change the world for the better. U.S. imperial domination cannot be voted out of power, but it can undergo a facelift to become a more effective evil. That is the central mission of the ruling class at this time and a very dangerous one at that.

But for as much as there is to lament, the last year has also produced several reasons for the left to be hopeful. The Trump era has shown that much of the world is seeking an independent economic and political path from the U.S.' unipolar and imperialist development model. Trump's trade war with China and the U.S. ruling class' war provocations with Russia have only brought China and Russia closer together. Latin American nations such as Venezuela have relied upon aid from Russia and China to defend themselves from U.S.-backed coup attempts. Syria has shown interest in joining China's Belt and Road Initiative the global Silk Road project which plans to invest trillions of dollars' worth of infrastructure development in Global South nations under the leadership of the People's Republic of China.

Despite the myriad of contradictions that exist in China's hybrid model of socialism with capitalist characteristics, the Peoples Republic is front in center in the struggle against U.S. imperialism. China's entrance into the global capitalist economy in the 1970s has possessed a dual character. China is leading the way in addressing "climate change," a euphemism for capitalism's destruction of the environment. Massive displacement of communal peasants (i.e. "migrant workers") has been mitigated by China's focus on anti-poverty initiatives. The Communist Party has ensured that private profits have been distributed to workers and peasants in the form of subsidies and wage increases. China's population of billionaires has grown alongside the reduction of poverty for hundreds of millions of people. Economic growth has not been sacrificed for poverty reduction as the neoliberal ruling class often tells us is the case. China has in many ways eclipsed the U.S. and West as the world's economic superpower. This is not what the U.S. and the West intended when they supported China's decision to open its economy to the capitalist market beginning in 1978.

The story has been a lot different for workers and oppressed people who remain under the vice grip of U.S. imperialism. Economic conditions continued to worsen for over half of the planet. The Trump administration has enriched the few at the expense of the many with pro-Wall Street tax policy and a massive increase to the military budget. The people of Yemen continue to suffer from hunger, malnutrition, and disease due to the violent U.S.-backed war being waged by Saudi Arabia. U.S. sanctions on Zimbabwe, DPRK, Iran, Syria, and Venezuela have arrested economic development and prematurely taken the lives of tens of hundreds of thousands of people.

As Martin Luther King Jr. predicted, the coups, sanctions, and military invasions spearheaded by the U.S. abroad have caused a social explosion at home. Recent reductions in the overall prison population have done little to improve life in Black America. Local police departments are provided millions of military weapons from the Pentagon's 1033 program to terrorize Black communities. Three million undocumented migrants were deported under Obama, with the Trump administration doing its best to match or exceed that number should it receive another four years in 2020. To make matters worse, there has been little resistance to the U.S. police or surveillance state in the 21st century. The Black Lives Matter movement has faded into the background of mainstream politics and non-profit careerism. Mass surveillance appears not to bother many in the U.S. population who have been desensitized to their civil liberties being stripped from them under the fearmongering banner of the War on Terror.

The largest movement numerically in the U.S. is neither an anti-war movement nor a revolutionary socialist movement. Rather, millions of young workers, including many Black workers, have placed their hopes in Bernie Sanders and his 2020 presidential campaign. Sanders' campaign is an expression of the working class' growing thirst for social democratic reform. But the entire ruling class is opposed to everything Bernie Sanders stands for and sees his agenda as an existential threat to the future of capitalism itself. Profit maximization requires labor rationalization, white supremacy, and capital flight to nations devastated by U.S. wars of aggression. The Democratic Party and its corporate donors are wholly incapable of providing the masses Medicare for All, a living wage, or a rollback in the forty-plus year Race to the Bottom. A political crisis of legitimacy has emerged within the two-party corporate duopoly which threatens to elect Trump for a second term should the ruling elites disallow Sanders from the opportunity to govern.

Many questions remain unanswered as we look forward to the year ahead. How will young people and the working class generally react to Act Two of the repression of Bernie Sanders' presidential campaign when the Vermont Senator is forced to confront the entire weight of the Democratic Party establishment in the upcoming Democratic National Convention in July? Will the Black struggle for self-determination and socialism regain its prominence in the U.S. as the most revolutionary movement within the imperialist world? Can the heroic resistance of the world's people prevent a global confrontation between the great powers, or will the U.S. make a decisive and humanity-ending move to wage a full military assault on Russia and China? These questions should be on the minds of anyone who calls themselves the left in the United States heading into the 2020 year.

Political questions never go unanswered for long. Either U.S. imperialism continues to shape the planet in its destructive interests, or the people fight back to build a new world all together. Progressive forces in the U.S. are currently not developed enough to meet the challenges of the new year. Austerity, war, state repression, and white racist reaction is guaranteed so long as the Democratic Party remains the vehicle from which the left chooses to fight the perils of late stage capitalism. The Democratic Party is entirely committed to fostering unity amongst the ruling class for the purposes of war and austerity and has deployed every weapon at the disposal of the U.S. state and civil society to censor not only the politics of Bernie Sanders but also the politics of Black liberation and class struggle that stand to the left of the social democrat.

Taking down the Democratic Party is the most important task of the new year. The Democratic Party and its corporate donors are the single largest impediment to transforming struggles to elect Bernie Sanders or strike against individual employers into a class conscious and internationalist mass movement. So-called "progressive," Democratic Party-linked non-profits and attractive individuals such as Greta Thunberg offer a moralistic vision of resistance that appeals to the emotional heart strings of the elites. However, the Democratic Party has told us time and again how they really feel about the poor and the downtrodden. There may be two political parties in the United States, but there is only one ruling class agenda. It is past time that we spend more time on exposing this agenda and less time flirting with the lies and the scapegoats that the Democratic Party creates to protect the interests of its corporate masters.

Related Topic(s): Democratic; Democratic Leadership Council; Democratic National Committee; Democratic Party, Add Tags
Add to My Group(s)
Go To Commenting
The views expressed herein are the sole responsibility of the author and do not necessarily reflect those of this website or its editors.