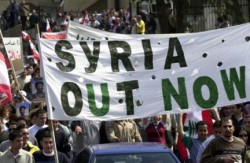 Lebanon too was targeted for a CIA 'revolution'

Let's not kid ourselves, when just about every "revolution' (not to mention many acts of terrorism) in Eastern Europe and the Middle East over the past 10 years has obviously been the work of the axis of evil spy agencies known as the CIA/Mossad/MI6, why would anyone be mad enough to think that what is going on in Syria right now is any different? Such "revolutions' have, after all, been more or less the precise raison d'etre of those so-called "intelligence agencies' for many decades.

So I'm telling you nothing new there. "Regime change' has always been a core part of the job description, even if many of the peons are unaware of just what they are involved in. And even among the more conscious elements, some are skilled enough in the ancient art of mental gymnastics to convince themselves that they are doing it for "freedom and democracy', ya know, the little people of the targeted country.

If you push them on it, they brighter ones will admit that, ok, so it's not really democratic, but what they're REALLY doing it for is the folks back home in Western Europe and the grand "ol US of freakin' A (the Mossad's rationalisations are slightly different and a little more twisted). The auto-bullshit line goes like this: if they didn't instigate such "popular uprisings' and facilitate the installation of a true and proper Western-friendly regime, how can they insure that Western muti-national corporations have free access to cheap resources and thereby assure the wonderful standard of living we enjoy all the way "over here' in the "West'? You see, if you like cramming one-step-from-plastic-type, micro-wave-ready "food' down your throat, and if you're addicted enough to want to keep doing so, then you better get with the CIA program then!

But I'd advise you to not get too interested in the tactics that our sneaky spook types use in the orchestration of such glorious "revolutions'. It might upset your stomach to the point that you can't have that second Big Mac.

You see, "revolutions' can't be totally faked in the sense that you really do need to galvanize a significant number of people in the host nation to get out onto the streets. The Western media comes in handy to give lots of biased coverage to any demonstrations, inflate the numbers of people and to vilify the existing government, but you still need some genuine images of angry masses. So how do you orchestrate that? Well, take Iran in 2009 as an example.

Neda Aqa-Soltan was murdered by unknown gunmen, but the Western media made it clear that, in their biased opinion, she was shot by "Ahmadinejad's thugs'. People around the world were encouraged to be incensed at her death and thereafter her name and image (even if it wasn't actually her image) became a rallying cry for the anti-government protestors. In case you're not getting my point, I'm saying that it is almost certain that the CIA et al were behind her murder (directly or indirectly). From a the point of view of the conscienceless, completely "goal-driven' mind, it makes perfect strategic sense.

Once we understand that, we are equipped to take a look at Syria.

First a snippet from Apri l this year to set the scene:

"The State Department has secretly financed Syrian political opposition groups and related projects, including a satellite TV channel that beams anti-government programming into the country, according to previously undisclosed diplomatic cables."

Jump forward to today and we learned about the horrible fate of Hamza Ali al-Khatee, a 13 year old Syrian boy who was abducted from the streets of Jiza and returned a month later, his dead body showing signs of severe torture and mutilation. No one knows for sure who carried out this unimaginably horrific deed, but the Western press is very happy to blame it on Syrian soldiers who were, it is strongly implied, carrying out the direct orders of President Assad no less.Needless to say, Hamza is now being used in the same way as Neda in Iran to bolster the flagging "Syrian revolution'.

I'm not just saying that agents working on behalf of American, Israeli and British "spy agencies' are the real culprits here, I'm also saying that those entities have, (much) more often than not, constituted the hidden hand behind such clearly politically motivated acts of inhumanity.

As the reality of psychopaths in power continues to spread and infect the world and its people,  we can be ever more confident about relying on the maxim of "who benefits' to ascertain the truth behind the headlines.

Joe Quinn is an author, editor and researcher and has been a contributing editor for Sott.net since 2002. He holds a an MA in international Business Studies and a first degree in Spanish Literature and Information Management and has a professional (more...)
Related Topic(s): Anti-government; Death; Democracy; Demonstrations; Mossad; Murder; Protestors; Psychopath; Revolution; Thugs; (more...) Torture; Torture; Torture; Truth, Add Tags  (less...)
Add to My Group(s)
Go To Commenting
The views expressed herein are the sole responsibility of the author and do not necessarily reflect those of this website or its editors.