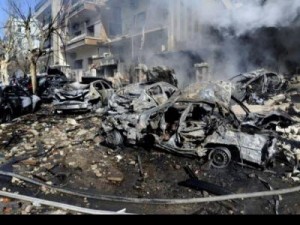 Utter contempt is amply justified when it comes to those who knowingly lie in the service of war and global imperialism. In this regard the leading players in the Western media, from owners to top executives, to leading editors and figures on camera in America, deserve to be hauled before a Nuremberg-class tribunal for crimes against humanity. Right along with the other warmongers in government and the Congress.

Wars do not happen accidentally. "Peoples" by the millions do not spontaneously march across another nation's frontiers in search of conquest and blood. Such crusades require leaders, and usually, in the age of nominal democracy, "the consent and willful participation of the masses." That means those who will do the most killing and the most dying.

All of this requires plenty of propaganda, and the chauvinist pump has to be primed over and over again. Humans are no angels. In fact a case could be made that they're, from nature's viewpoint, exactly the opposite. But the reluctance to kill fellow humans appears hardwired. Thus, as leaders of all stripes have learned since time immemorial, and all drill instructors know so well, it has to be overcome.

Jingoism to the rescue

The people need to be whipped into frenzies. The demonizing of the enemy must be carried out with zeal, leaving few, or no, doubts in the minds of the majority. People need to be taught to hate and fear. In this regard  tribal sanctimony and clannishness is a splendid tool that rarely disappoints. Love of tribe,facilitated by propaganda, trumps loftier visions of a humanity united in peace, egalitarianism, and mutual respect just about every time. (Narrow tribalism can be shed, alright, but it won't be if powerful elites profit from a debased status quo in which mediocrity and the lowest instincts are abetted among the masses instead of challenged.

The biggest test of this was the Great War. On the eve of the First World War, in the early 1900s, the German Social Democratic Party (SPD) was the leading force in the international labor movement. Socialists in general had as a standing policy a refusal to support or participate in what they defined (correctly) as bourgeois, or imperialist, war. But as the winds of war began to blow ever harder, and the press raised the pressure on the pacifist /workerist camp, fissures began to show up in their ranks, eventually splitting the SPD into two factions; a majority faction that joined the war party with Haase, one of the leaders proclaiming, "We will not let the fatherland alone in the hour of need!". A second faction which eventually would become the Spartacus League, led by the legendary Rosa Luxemburg and Karl Liebknecht (both murdered at the end of the war with the connivance of the reigning SPD by the rightwing Freikorps).

Prevented from speaking in the Reichtag, which was his right as a deputy, and despite immense obstacles and intimidation, Liebknecht was able to produce and circulate a leaflet explaining his opposition to the war:

"The present war was not willed by any of the nations participating in it and it is not waged in the interest of the Germans or any other people. It is an imperialist war, a war for capitalist control of the world market, for the political domination of huge territories and to give scope to industrial and banking capital."

He was absolutely correct, of course, but the chauvinist noise, in which the press, as usual, played a key role, drowned out his wise words and sealed his fate.

Nothing much has changed since that awful period which would eventually spawn a second war and Nazism itself, but in our time the American propaganda system (aka "the Free Press") presents humanity with a much more difficult challenge since it is infinitely stronger and far more hypocritical. Thus, the perfidy of the bourgeois media,loyal servitors of their capitalist masters,continues unabated.

In this context, let us remember that the process of indoctrination for young journalists, of fitting into the propaganda machine, of doing things unquestioningly "as professional journalists do" begins early, not just with the all-enveloping self-flattering myths that penetrate the mind of most Americans almost as soon as they draw breath, but with the nation's "Journalism Schools." These schools are ever more interested in having their graduates join the existing scandalously manipulative apparatus of misinformation than in resisting and exposing it. In a word, careerism always wins. It's not too surprising, then, that as our colleague Stephen Lendman has said with his usual uncompromising precision,

When America goes to war or plans one, media scoundrels march in lockstep. Journalism is the first casualty. Managed news misinformation substitutes for truth and full disclosure. Cheerleading propaganda is relentless. Readers and viewers are betrayed. Imperial wars are called liberating ones. Separating fact from fiction is challenging. Only replacing independent regimes with pro-Western puppet ones matters. Media scoundrels support it. Blood on their hands doesn't deter them. Steady income eases conscience pangs. Soul-selling pays well. (Stepped Up Media War on Syria, The Greanville Post, 6.10.12)

Lendman is far from exaggerating, although we wish he were. Consider this item, picked at random from a crowded field, all spouting similar notions:

The world according to NBC: "SYRIANS SAY: 'WE NEED INTERVENTION!'"
Source: NBC News --

NBC's Ayman Mohyeldin visits Zabadani, Syria, a once beautiful snowcapped resort town that has been deeply scarred by the recent military crackdown and speaks with members of the anti-regime Free Syria Army. (Nightly News)