Copyrighted Image? DMCA
>
Robin Williams (Wikicommons)
The world is justly lamenting the premature departure of Robin Williams, a suicide at 63, one of the most unique and beloved comedians to appear in the postwar period, a true master of improvisation, but also a man who, like many comics, was utterly torn and tormented on the inside. It's next to impossible to know for certain the real motives that push someone over the edge, but in Williams' case the fractures and weaknesses in his temperament had been visible from the start.
A shy youth born to affluence, like many celebrities, especially in the bloated and hyper-pampered American culture, Williams had self-indulgent tendencies that inevitably devolved into cocaine and alcohol addictions. As was the case with John Belushi, and the more recent example of Philip Seymour Hoffman, this almost guaranteed a history of constant self-abuse culminating in periodic crises and ultimately death. As Williams entered his senior years the struggles with addiction were compounded by a lifelong tendency to depression (he was diagnosed as bipolar) and heart disease requiring the replacement of an aortic valve in 2009. It is known that serious cardiac issues can precipitate serious depressive episodes.

Except for a handful of figures like the legendary Lenny Bruce and later George Carlin, Chris Rock and Jeanine Garofalo, American comedy in the postwar period has been mostly an escapist, nonpolitical affair. Some of the most popular contemporary comics, including Williams, Steve Martin, John Candy, Bill Murray, Jerry Seinfeld, and even an older generation that presided upon the ushering of television--Milton Berle, Sid Cesar, Jonathan Winters, Phil Silvers, Jerry Lewis--carefully eschewed explicitly political topics, considering this too risky to their careers. Many, of course, had no desire to make political and social commentary the centerpiece of their art, since they simply lacked the ideological clarity or personal compulsion to do so. I am talking here about leftist commentary that zeroes in on the system's crimes and flaws, not merely liberaloid/Democratic party-style GOP-denigrating potshots in the style popularized by Jon Stewart, Bill Maher, Stephen Colbert and many others of their ilk.
It is in this manner that these two giants of comedy --Williams and Carlin--differentiate their material and define their art. Williams, a master of personal, quirky, often manic and near-impossible to classify material, leaves behind a legacy that covers an unlimited range of topics, frequently cultural and sexual, notably his series of sendups of different nationalities. Who can resist Williams' hilarious version of the invention of golf (see video), as explained in near incomprehensible burr by a native Scot?

Still, after almost 40 years of uninterrupted work, the core of Williams' comedy can be seen as just zanily observational with only a passing touch of the social and political (as a Hollywood liberal his most politicized barbs were reserved for George Bush in 2008). In fact, the main thing we deplore about Williams, given his obvious intelligence, is the absence of any real political conscience capable at least of realizing that America's filthy imperial wars are not something to whitewash through art. Perhaps it is for that reason that his much celebrated film Good Morning Vietnam always felt like a stain on his career, an outing reinforced by his quietly flag-waving, Bob-Hopish-entertain-the-troops tours. For a man that ahead of his time in terms of comedic boundaries, such participation remains hard to explain. (Again, contrary to majority opinion on this, and his risque standup persona, I found most of his movie roles, except for Garp, embarrassing or downright cloying and conformist. (Patch Adams is almost unwatchable.)

Despite this, Robin Williams' place is assured in the pantheon of entertainers in postwar America.

Below: George Carlin on Business Ethics 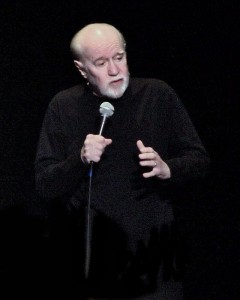 (Image by Unknown Owner)   Details   DMCA
Carlin in Jesus is Coming (Credit: Bonnie from Kendall Park, NJ, USA)
Of working-class Irish background, Carlin was cast in a different mould. While a lot of his work concerned regular observational comedy, what he baptized as "humanity's bullshit," he was also a serious (some would say infamous) student of the English language and a man deeply offended by hypocrisy. Few targets of concentrated mendacity seemed as tempting to his satirical wit as the business system itself, the main engine of American society, its values, and the real controller of the government despite pious protestations of democratic power. Consistent with his vision and temperamental urge to throw bricks at the established order and the human species itself, Carlin's most enduring and irresistibly funny sketches feature often bitter, misanthropic commentary on advertising, politicians, and other creatures and institutions central to the ability of the capitalist system to operate.
In his later years, fully aware now of the dimensions of the destruction wrought by a well-organized but criminally led humanity, Carlin turned his eyes in bitter despair to the environment, endless war, corruption and other pestilences inherent in the global disorder we have allowed to prevail.
Can anyone blame him for this statement excerpted from his Life is Worth Losing show?

I look at it this way... For centuries now, man has done everything he can to destroy, defile, and interfere with nature: clear-cutting forests, strip-mining mountains, poisoning the atmosphere, over-fishing the oceans, polluting the rivers and lakes, destroying wetlands and aquifers... so when nature strikes back, and smacks him on the head and kicks him in the nuts, I enjoy that. I have absolutely no sympathy for human beings whatsoever. None. And no matter what kind of problem humans are facing, whether it's natural or man-made, I always hope it gets worse.

Not for nothing does George Carlin remain, and will remain for a long time, a towering figure among American social critics, the Mark Twain of modern comedy.
Patrice Greanville is The Greanville Post's founding editor. He writes frequently about cultural, media, and political matters.

Media critic and former economist P. Greanville is The Greanville Post's founding editor (http://www.greanvillepost.com/). He also serves as publisher for Cyrano's Journal Today. He has a lifelong interest in the triumph of justice and (more...)
Related Topic(s): Comedy; George Carlin; Humor; Robin Williams, Add Tags
Add to My Group(s)
Go To Commenting
The views expressed herein are the sole responsibility of the author and do not necessarily reflect those of this website or its editors.