From The Unz review 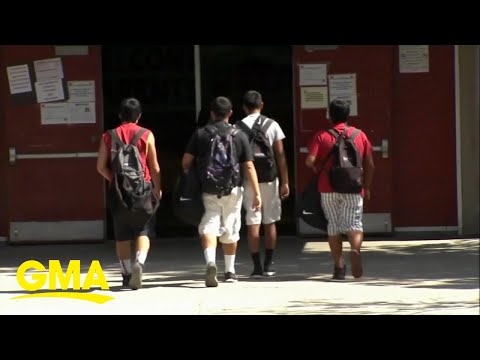 A debate is raging over the safety of opening schools and child care centers as dozens of states see a rise in COVID-19 cases.
(Image by YouTube, Channel: Good Morning America)   Details   DMCA

Countries around the world are ignoring the media's fearmongering and starting to reopen their schools. This is a positive development which shows that the Coronavirus's psychic-grip on the population is gradually loosening. Once again, people are asserting control over their own lives and those of their children, which is why reopening the schools has become a top priority.

COVID-19 poses little or no risk to children. They don't get sick and they don't die. If they contract the infection, they usually remain asymptomatic and, crucially, they do not pass it along to others. Most of what you have heard or read about COVID and children is disinformation disseminated by a corrupt and despicable media that is forever fueling public hysteria. The mainstream media is spearheading the war against the American people so, naturally, they have perpetuated the illusion that school poses a threat to our children's health and safety. It does not. Attending school is safe and schools should be open. Check out this clip from an article at the National Review:

"Kari Stefansson, CEO of the Icelandic company deCODE genetics in Reykjavík, studied the spread of COVID-19 in Iceland with Iceland's Directorate of Health and the National University Hospital. His project has tested 36,500 people; as of this writing:

That sums it up perfectly. Now compare the Icelandic Report to the comments of Washington Post columnist Jonathan Capehart who appeared on Friday's PBS News Hour with Judy Woodruff:

Jonathan Capehart: "Yes, which, when you have a global pandemic that is spiking all over the country in most of the states, and then you have the president of the United States, who, as David was saying, is not following his own guidelines for helping to keep the pandemic in check, the idea that we are talking about opening schools and forcing schools to open, when there's no national strategy, no vaccine, and 50 different ways of going about trying to tamp down the pandemic, strikes me and I'm not a parent.

"And I understand that parents are concerned about their children's education. But sending children to schools in the middle of a pandemic with no national strategy, I think, is worrisome." ("David Brooks and Jonathan Capehart on Trump's school pressure, Biden's economic plan, " PBS News Hour)

Capehart's comments are part of an MSM script that is designed to spread disinformation and fear that school reopenings pose a threat to the safety of children. It is a deliberate attack of one of society's primary institutions, an institution that not only educates and socializes our children but also provides the opportunity for both parents to join the workforce to maintain their standard of living.

Capehart's comments are not grounded in fact or science, but politics. They are intended to prolong critical parts of the lockdown in order to intensify public anxiety and, thus, undermine Donald Trump's reelection prospects. Surprisingly, Capehart's comments contrast dramatically from a report in his own newspaper (the Washington Post) that recently published a lengthy report on the same topic titled "Reopened schools in Europe and Asia have largely avoided coronavirus outbreaks. They have lessons for the U.S." Here's an excerpt:

"Public health officials and researchers say they have not detected much coronavirus transmission among students or significant spikes in community spread as a result of schools being in session...

Related Topic(s): Children; Coronavirus; Fearmongering; Media; Schools; Students, Add Tags
Add to My Group(s)
Go To Commenting
The views expressed herein are the sole responsibility of the author and do not necessarily reflect those of this website or its editors.