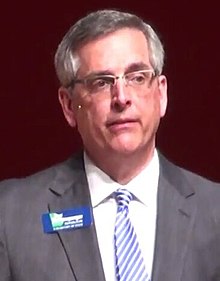 Despite the hype, an investigative report released today reveals Georgia Secretary of State Brad Raffensperger is no hero defending democracy from Trump.

Rather, in this investigative film (produced by George DiCaprio, Thom Hartmann and Rosario Dawson, and narrated by Debra Messing), Raffensperger is exposed for using vote suppression Jim Crow tactics, even misleading a federal court to keep 198,000 Georgians from voting in Tuesday's Senate run-off.

The report centers on the lawsuit by Black Voters Matter, Rainbow PUSH and other voting rights groups to return these voters to the rolls in time for the election. It is based on Greg Palast's investigation released by the ACLU of Georgia.

In the film, we see that the Secretary of State literally shut and locked his office in the State Capitol to avoid complying with a federal judge's directive to meet with Palast, Black Voters Matter and their legal team to return voters before the runoff election.

The voting rights groups hunt down and confront Raffenperger's Director of Elections with evidence of Black and Hispanic voters illegally blocked from voting and hand him a list of 198,000 Georgians wrongfully purged from the voter rolls (including, infamously, Martin Luther King's 94-year-old cousin, Christine Jordan).

Our battle goes beyond January 5, 2021 and Georgia. This is a fight we're in for the long haul until equal ballot access and voting rights are secured for ALL Americans.

Greg Palast's investigative reports appear in Rolling Stone, the Guardian and on BBC Television. His latest film, The Best Democracy Money Can Buy, on how Donald Trump stole the 2016 election, is available on Amazon. Palast is Patron of the Trinity (more...)
Related Topic(s): ACLU; Election; Georgia Election; Georgia Politics; Voting, Add Tags
Add to My Group(s)
Go To Commenting
The views expressed herein are the sole responsibility of the author and do not necessarily reflect those of this website or its editors.