On Tuesday January 25, at the same moment Congress gathered for the State of the Union address from Barack Obama, almost a hundred people gathered to discuss "Torture, Guantanamo and Accountability" at DePaul University Law School in Chicago. 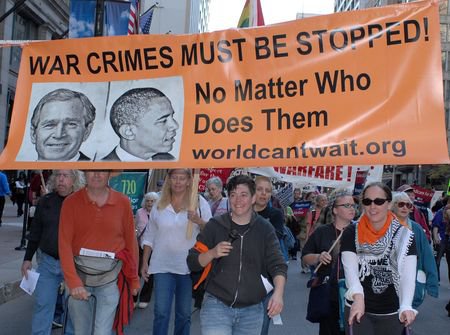 (Image by Unknown Owner)   Details   DMCA
It's been difficult over the last 2+ years to fill a room for such a discussion, so we were heartened by the participation of 40 law students and attorneys.  Dr. M. Cherif Bassiouni, a distinguished research professor emeritus at the law school, and founder of the International Human Rights Law Institute; and Candace Gorman, who represents two men imprisoned at Guantanamo, spoke with me on the panel.
Dr. Bassiouni described the "chasm" between the promises made by Obama while campaigning and the actions of Obama as president, regarding the rule of law as represented by the United States.  Candace told the story of one of her clients, still in Guantanamo.  He is apparently one of the 48 who will be detained indefinitely, bringing some of the students to tears of frustration.  We'll have more on the program soon.  Listen to Dr. Bassiouni and Ms. Gorman in an excellent hour-long discussion on Chicago public radio WBEZ.
Our colleague Andy Worthington, about to tour Poland with former Guantanamo prisoner Moazzam Begg, took the time to describe the Obama's administration's plans for those imprisoned at Guantanamo in Obama's Collapse: The Return of the Military Commissions:
This year the President's bitter surprise for the prisoners (which has encouraged a widespread peaceful protest at the prison, as reported here) was two-fold. The first was his failure to veto a military spending bill passed by Congress, which contained cynical and unconstitutional provisions preventing the transfer of any prisoner to the US mainland, in which lawmakers also demanded the power to prevent the release of prisoners to countries regarded as dangerous"
The second bitter surprise for the prisoners was the announcement last week, first mentioned by the New York Times, that, although federal court trials have effectively been suspended, specifically derailing the administration's stated intention to prosecute Khalid Sheikh Mohammed and four other men accused of involvement in the 9/11 attacks in federal court, the administration is preparing to push ahead instead with trials by Military Commission for at least some of the 33 men recommended for trials by Obama's Task Force.
No, none of those plans were part of the State of the Union address.  Those of you listening for "real change" in Obama's direction on the wars Tuesday night were disappointed.  Rocky Anderson, former mayor of Salt Lake City, and an opponent of torture, spoke on Democracy Now January 26 about the speech:
"He didn't mention human rights at a time when he has assassination lists for the first time in our nation's history, that include U.S. citizens. No due process--we don't just have indefinite detention anymore; we just go out, put their name on a list, and kill them. The invocation of state secrets, it's absolutely obliterated any notion of checks and balances. Our courts have been removed from that equation, by and large, when it comes to torture, when it comes to warrantless wiretapping by our government. No discussion about that, of course. And we're seeing, really, an institutionalization by this president of some of the worst abuses and what we, a lot of us, thought were just aberrations during the Bush years."
I'd like to note what Obama did say:
""because we've begun this work, tonight we can say that American leadership has been renewed and America's standing has been restored.  Look to Iraq, where nearly 100,000 of our brave men and women have left with their heads held high. (Applause.) American combat patrols have ended, violence is down, and a new government has been formed. This year, our civilians will forge a lasting partnership with the Iraqi people, while we finish the job of bringing our troops out of Iraq. America's commitment has been kept. The Iraq war is coming to an end. (Applause.)
"We've also taken the fight to al Qaeda and their allies abroad. In Afghanistan, our troops have taken Taliban strongholds and trained Afghan security forces. Our purpose is clear: By preventing the Taliban from reestablishing a stranglehold over the Afghan people, we will deny al Qaeda the safe haven that served as a launching pad for 9/11.
Thanks to our heroic troops and civilians, fewer Afghans are under the control of the insurgency. There will be tough fighting ahead, and the Afghan government will need to deliver better governance. But we are strengthening the capacity of the Afghan people and building an enduring partnership with them. This year, we will work with nearly 50 countries to begin a transition to an Afghan lead. And this July, we will begin to bring our troops home. (Applause.)"
Last I heard, the Defense Department is balking at even a 2014 pull out date of Afghanistan.  The unjust, immoral, illegitimate occupations continue, and with them, the "war on terror" against civilians across the region.  It's up to us to bring out that reality to people.
I saw John Boehner pinch up his face when Obama obliquely mentioned the repeal of "Don't Ask, Don't Tell."  As much as the reactionaries howled against letting gays be out in the military, I have to say that any gay person who actually decides now to enlist has lost their mind.  Just because one can now serve openly does not mean the whole enterprise of occupying countries and killing civilians should involve you!  I say, "don't ask, don't tell".no -- DON'T GO!"  It's a bad thing, as several professors have written me, that because DODT is being repealed, colleges are now planning to open the doors once again to military recruiters.
I'll see you in Washington D.C. on March 17-19 as we step up the visible protest on the anniversary of the Iraq war.

Debra Sweet is the Director of World Can't Wait, initiated in 2005 to "drive out the Bush regime" by repudiating its program, forcing it from office through a mass, independent movement and reversing the direction it had launched. Based in New York City, she leads World Can't Wait in its continuing efforts to stop the crimes of our government, including the unjust occupations of Iraq and Afghanistan and the torture and detention codes, as well as reversing the fascist direction of U.S. society, from the surveillance state to the (more...)
Related Topic(s): Government-sponsored Terrorism; Govt-International Warmongering; Protest; State Of The Union; Torture, Add Tags
Add to My Group(s)
Go To Commenting
The views expressed herein are the sole responsibility of the author and do not necessarily reflect those of this website or its editors.

War Criminals to Meet in Chicago, But Somehow Protest Will be the Danger?