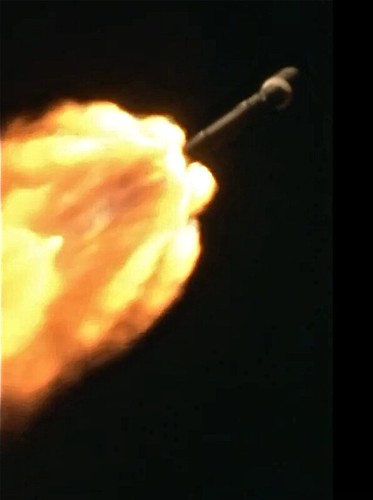 The goal of Elon Musk's SpaceX is colonization of Mars, and the bottom-up, NGO space exploration organization has taken a number of successful steps in that direction. The visionary project offers a genuine sense of perspective amidst a sea of political corruption. So take a moment and enjoy this short video of extraordinarily beautiful slo-mo footage compiled from four launches. It'll touch your soul. And restore hope in the higher aspirations of humanity.

After Musk sold Paypal for $1.5 billion, with an intention to change the world for the better, he invested in two startups: replacing petroleum based cars with electric, via Tesla Motors, and taking steps to colonize Mars, via SpaceX. Musk has"staked his fortune on businesses that address fundamental human concerns."

Tesla and SolarCity are on track to merge before the end of the year. Earlier this week on SolarCity's conference call, Musk referenced one of the two new products which will be launched by year's end, saying , "It's a solar roof, as opposed to modules on a roof...I think this is really a fundamental part of achieving differentiated product strategy, where you have a beautiful roof. It's not a thing on the roof. It is the roof."

Currently, Musk's estimated worth is nearly $13 billion. But it wasn't easy:

SpaceX was founded by Musk in 2002. But 2008 was "a year Musk describes as the worst of his life. Tesla was on the verge of bankruptcy. Lehman had just imploded, making capital hard to come by. Musk was freshly divorced and borrowing cash from friends to pay living expenses. And SpaceX was a flameout, in the most literal sense. Musk had spent $100 million on the company and its new rocket, the Falcon 1. But its first three launches had all detonated before reaching orbit. The fourth was due to lift off in early Fall of that year, and if it too blew apart in the atmosphere, SpaceX would likely have numbered among the casualties. Aerospace journalists were drafting its obituary already. Musk needed a break, badly. And he got it, in the form of a fully intact Falcon 1, riding a clean column of flame out of the atmosphere and into the history books, as the first privately funded, liquid-fuelled rocket to reach orbit." ~ Aeon

Related Topic(s): Elon Musk; Mars Colony; Rocket; Spacecraft; Spacex, Add Tags
Add to My Group(s)
Go To Commenting
The views expressed herein are the sole responsibility of the author and do not necessarily reflect those of this website or its editors.