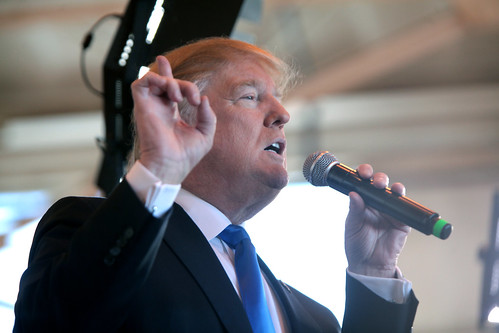 "If ... Trump wins the Republican nomination, his victory will be celebrated not only in Mar-a-Lago, but also in Beijing. The Chinese Communist Party's media conduits are swooning over the vulgar, politically-incorrect frontrunner, (sic) telegraphing that if Trump were to rise to a position of real power, it would be a boon for the country's regional ambitions.
1. "Chinese-language press and state media - especially foreign policy columnists - have written extensively and favorably about Trump's geopolitical views. Many pro-Beijing writers have looked past his threats of a trade war with China, viewing his willingness to undercut America's existing alliances in Asia as an incredible strategic opportunity"

The article also refers to Trump's apparent preference for America's heretofore least favorite nations including Putin's Russia. And Putin mirrored China's strong hopes for a Trump win in a CNN report in March where the Russian leader felt he and Trump had a lot in common.

And Trump doesn't stop there. Reuter's reported just a week ago that he's even expressed a willingness to "meet with North Korean leader Kim Jong Un to try to stop Pyongyang's nuclear program, proposing a major shift in U.S. policy toward the isolated nation." In essence, Trump is willing to give N. Korea an air of legitimacy it certainly is does not deserve.

Ostensibly, this meeting will contain a conversation involving renegotiating the climate accord. Who knows? Trump's own stance on climate change shifts like the breeze. If climate change does not affect him directly, he denies it exists. When it does affect him directly, as is the case in Ireland where his most beautiful golf courses are being threatened by rising tides and climate change resulting in more powerful storms, he is ordering the building of a "yuge" sea wall to protect his property.

There's a difference between a leader of the United States being willing to work together, fairly, with one time enemies (as Obama hopes to do with Cuba and is trying to accomplish with Iran), and being so taken, not only by their form of government, but also by their persona, that they hope to replicate it here. It looks like Trump is moving in the latter direction.

If Trump is elected President, how long will it take before the United States becomes totally Communist or worse, Fascist? It has already been established that the U.S. is an oligarchy. The political leaders we have elected in the past 30 years have chipped away most of the safety nets that have protected us from takeover by greedy corporations. This was done, very successfully, by the free infusion of massive amounts of money from uber-rich corporations into the pockets of our elected officials to guarantee legislation that increases their power to make more and more money. It also assured these corporations that existing legislation that cuts their profits will be eliminated. Who says "money can't buy everything?" It can and has bought a country, especially since the passing of the Supreme Court's fatally flawed decision, Citizens United. It should have been called, "Billionaires United."

The Huffington Post reported that Mitch McConnell has faith that if Donald Trump is elected President, he would "would respect limits on his authority...." Now where in the world would a person like McConnell, who has no respect for authority himself, get the idea that Trump would respect the authority of congressional leaders who were entirely against him even running for the office until he knocked out every other contender the GOP had to offer? Is everyone in the GOP brain dead?

Fascism is borne from oligarch governments, which we of the 99% are living with right now. With Trump in the White House, it's highly doubtful if even Congress will be able to control him. Even the media that propelled him into the never-ending spotlight are now forced to keep him there to advise the public of what a danger he presents as a leader of this country.

So to my Republican friends who are struggling just as I am to make ends meet, or who are watching their children and grandchildren in the same position, think long and hard on who you want to elect to run this country. If what someone says sounds to good to be true, it probably is.
Listening to a bunch of talking heads who want you to believe that Democratic Socialism never worked is a lie. It works just fine when legislation is in place that keeps large, multi-national corporations from saturating the airwaves with lies that serve no purpose but to propel them into even greater wealth and create greater distrust of each other where no such distrust existed before.

Related Topic(s): Republican Extremism, Add Tags
Add to My Group(s)
Go To Commenting
The views expressed herein are the sole responsibility of the author and do not necessarily reflect those of this website or its editors.