I decided to write this as an open letter to one of my friends here on OpEd, Jerry Lobdill, because (1) there are way too many characters to fit into a comment, and (2) because I wonder if any of us are coming to the same conclusion. Jerry said something I have been feeling for a long time:
"The Democratic Party is not worth saving, let alone being helped to survive after treating its base as it has done by a shameless abuse of power."

It's actually an open letter to everyone with an opinion, and because your comment is so demonstrative of the quandary we all find ourselves in. Do we keep voting for the lesser of two evils, and let's face it, it's exactly what we have right now? Do we stay home because we don't like our choices? Do we cast a ballot for the opposing side to put the screws to what used to be our own political party, or do we try, once again, to gain support for a third party candidate? It just seems so daunting a task for which there can never be an outcome favorable to all of us.

I've come to the conclusion that regardless who gets the nomination, Sanders or Clinton, come hell or high water we have got to vote - one way or the other, we have to vote. Staying home is not an option.

We have to realize that even if Bernie Sanders wins, we will not receive instant gratification. It will be an uphill battle for the changes he envisions. Nothing will change instantaneously. It just is not going to go down that way, no matter who wins the primary or who wins the general election. Whatever is going to happen is going to occur over years, if not decades, but if we stop pushing, we can guarantee nothing will change.

I've been where you are believing the Democratic Party is just not worth saving. The yin and yang many of us have been experiencing over the past year has brought an entire country together believing in one thing, and that is that our entire democracy is broken and has to be fixed. It does not seem to matter if we are democrats, republicans or independents. The quandary is just how to go about fixing it?

I've pondered this idea of allowing the DNC to self-destruct and was truly in favor of it. But then I looked to the person who I respect the most in this entire country, Bernie Sanders, an honest man, a most caring person about the future of our country, one who knows right from wrong and chooses right, and I asked myself, what does this person whose judgment we admire really want all of us to do? He has already stated that he is a Democrat, he believes in democratic values, and he believes in the people of this country, and despite election rigging and vote tampering, he still believes in this process. He believes change will come, and it will come from us, all of us at the bottom, never from the top. We know what happens when change comes from the top. He's already said that despite who wins the nomination, this movement must continue.

This country had a good run from the time FDR started to mop up the floor with the Royalist philosophies. If you look back through history you'll find that Truman was not the best choice we had to keep FDR's legacy running, Henry Wallace was, but the Unions and even Eleanor Roosevelt at the time were not in favor of Wallace. They wanted - and we got - Truman. click here

The following three quotes can be found at laborquotes.weebly.com/presidential-quotes.html:

"Labor is prior to, and independent of, capital. Capital is only the fruit of labor, and could never have existed if Labor had not first existed. Labor is superior to capital, and deserves much the higher consideration."--Abraham Lincoln, a Republican.

"Every advance in this half-century--Social Security, civil rights, Medicare, aid to education, one after another--came with the support and leadership of American Labor."--Jimmy Carter, a Democrat.

What the above quotes show is that in actuality we are not all that different. Regardless what we are called, Democrat or Republican, We The People believe in the same things. We want the same things. We need to unite so we can all achieve those same things. I see a sane path forward if we all hang together and don't self-destruct. We have to be cognizant of the fact that unregulated Capitalism (what we have now) is not much better than unregulated Labor. There must be a happy medium between the two. Right now labor has taken a major hit in the form of "Right-To-Work-For-Less" states. We can change those back with time. 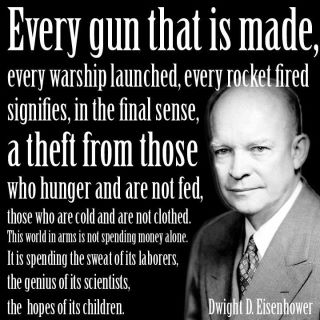 Ike Eisenhower, left of Obama and both Clintons, would never be electable as a republican today
(Image by JoeInSouthernCA)   Details   DMCA

Looking back on it now, it's kind of comical that the Republican Party nominated Dwight Eisenhower in 1951 following the end of the Truman reign. By any standard used today, Ike was much farther to the left of either Clinton (Bill or Hillary) and would never be allowed to run as a Republican. In Ike's second term, however, he made the mistake of choosing Nixon as his running mate.

Nixon was catapulted to the Presidency, not because everyone liked him or even trusted him (he was referred as "Tricky Dick" for good reason, but it's not certain if he acquired it from JFK or the Watergate incident www.urbandictionary.com/define.php?term=Tricky+Dick), but based more on the hopes he would continue the Eisenhower legacy of just being a caring, honest man. In fact, like Sanders, Ike never even wanted the job of President. Like Sanders, he ran because he wanted to clean up the corruption left by the Truman administration. Sanders is running pretty much for the same reason. In fact, I remember watching "The Brunch With Bernie Hour" that Thom Hartmann used to have every Friday when people would call in begging Bernie to run for President. His response was always that only if a good progressive candidate was not going to step up, that would be the only reason he would.

So if you count back to the Nixon administration which began in January 1969 until 1974 and look at it as the beginning of the end of democracy as we know it or at least know it should be, it has taken 47 years to completely destroy our democracy, which brings me to the point I'm trying to make here. There are two paths open to us: 1) as you and many others suggest, myself included at one point, we can let the DNC self-destruct resulting in division of its base, or 2) rebuild it by following the method used by the Koch brothers and concentrate on all 50 state and local elections and overthrow all the oligarchs, regardless if they are D's or R's and support any candidate running without funding from any superpac or corporate monopoly.

Related Topic(s): Caring; Come Home America; Democracy; Future; Independent; Judgment; Legacy; President, Add Tags
Add to My Group(s)
Go To Commenting
The views expressed herein are the sole responsibility of the author and do not necessarily reflect those of this website or its editors.