Before the poor guy explodes with righteous indignation and a false sense of assurance. 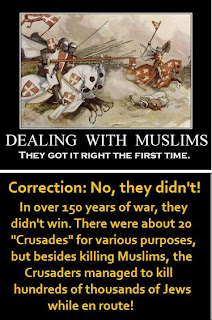 At times, I've almost felt sorry for Rick Santorum: it can't be easy to be in a battle to be "re-Googled." But then I stop and think of how many vain and stupid things the man has said and poof! I don't feel sorry for him anymore. His latest idiocy: Christians haver never really been aggressors in history. And people who say they have been are spewing "anti-history" and, of course, "anti-Christian" rot:

"The idea that the Crusades and the fight of Christendom against Islam is somehow an aggression on our part is absolutely anti-historical. And that is what the perception is by the American left who hates Christendom. They hate Western civilization at the core. That's the problem."

Let's get one thing straight: while I'm not trying to bash Christianity, the fact is that Christianity has never sufficiently apologized for its own sins. And while I consider myself a Christian, it's galling to me that some people paint Christianity's history as a (sometimes) misguided but devoutly focused, evangelizing mission, with persecutions strewn in its righteous path.

The picture of devoutly-driven Founding Fathers (by David Barton) and "purpose-driven" knights in armor defending Christ's tomb from the filthy Muslims (ala Santorum et al) has got to stop. Outright distortions and myths are not worthy of a Christianity that is struggling hard to put fatal prejudices behind it. The depiction "Dealing with Muslims - They had it right the first time" is totally barbaric and unworthy of an association with Christ.

Through the years, I have been researching what could be called a "Christian Crime Line." OK, that's a bit nasty, but there's no other way we can look upon these actions, especially when stacked up one upon the other. True, the eras in between the events may have had some ameliorating qualities, but the fact remains that non-Christians were persecuted and killed on a scale of much greater proportions than Christians were under the Romans, even before the Crusades. By the time Urban II gave his fateful speech, whole cultures had been wiped away "in the name of God."*

So here's a small section of Reverend Dan's Christian Crime Line. And to all the David Bartons and Rick Santorums out there: I'm not making this sh*t up!!

Since we were kids, the imagery of Christians kneeling, praying to God in the Coliseum just as lions are let loose has come to be a part of us and they way (and for some the only way) we relate to early Christianity. But after Constantine won the Battle of Milvian Bridge and saw (or possibly dreamt) the blazing crucifix in the sky with the motto, "In this sign you will conquer"** what happened?

314 - Christians begin to massacre pagans in Egypt and Palestine

319 - Arian Christian Heresy starts to spread throughout the Empire

325 - Council of Nicea is convened by Constantine to discuss date of Easter and deal with the Arian Christian problem. Approx. 300 bishops attended (out of 1800 in the entire empire, most of whom were in north Africa and most were Arian bishops)

325 - Approx. 3000 pagans are killed immediately after the Council of Nicea

327 - "Christian" (but not yet baptized) Constantine executes his son Chrispus in belief that he had sex with his step-mother, Fausta. He didn't. After Constantine finds out the truth, he has Fausta boiled ... in her own bathtub.

Rev. Dan Vojir is has been writing/blogging on religion and politics for the better part of ten years. A former radio talk show host (Strictly Books " Talk America Radio Network) and book publisher, Dan has connected with some of the most (more...)
Related Topic(s): Anti-christian; Christian Crime Line; Christian Right; Christianity; Crusades; Santorum Rick, Add Tags
Add to My Group(s)
Go To Commenting
The views expressed herein are the sole responsibility of the author and do not necessarily reflect those of this website or its editors.