Thousands cheer a bold challenge to the billionaire class. 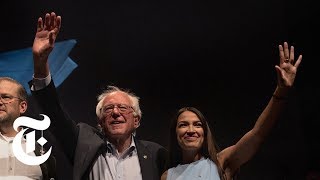 Vermont Senator Bernie Sanders and New York Democratic congressional nominee Alexandria Ocasio-Cortez came to Kansas to prove a point. But it wasn't the point that political and media elites imagined.

When Sanders and Ocasio-Cortez stumped for congressional candidates James Thompson, a civil-rights lawyer from Wichita, and Brent Welder, a labor lawyer from Bonner Springs, they were not talking about outflanking ideological rivals or moving pieces on a political chessboard. They were talking about issues that matter to working Americans.

What sort of issues? The sort that Thompson and Welder have made central to their campaigns: support for Medicare for All health-care reform, for an expansive commitment to civil rights, for women's rights, for humane immigration policies, and for an economic-justice vision that is rooted in a commitment to worker-class empowerment.

Standing up for unions and their members in Kansas -- a so-called "right-to-work" state where Republican governors have shredded workplace protections and embraced the anti-labor program of the Wichita-based Koch family -- may seem like risky politics to some Democrats. But that's simply not the case. This is smart politics at a time when Kansans, like working people nationwide, are justifiably enraged by the scorching inequality that the favored politicians of billionaire conservatives Charles and David Koch have fostered in states across this country.

"I don't think the people of Kansas or the people of Vermont or the people anywhere in this country think that it is appropriate that a handful of billionaires like the Koch brothers can spend some $400 million in this 2018 election cycle to elect candidates to represent the wealthy and the powerful," Sanders said as he discussed Thompson's bid, "so I think a defeat of the Koch brothers, if you like, would be a very symbolic victory."

As thousands cheered in Wichita, Sanders shouted: "I believe that every state in this country where people are struggling for a decent life is a state that will fight for justice."

Related Topic(s): Inequality; Issues; Jobs; Kansas Politics; Koch Brothers; Politics; Workers, Add Tags
Add to My Group(s)
Go To Commenting
The views expressed herein are the sole responsibility of the author and do not necessarily reflect those of this website or its editors.