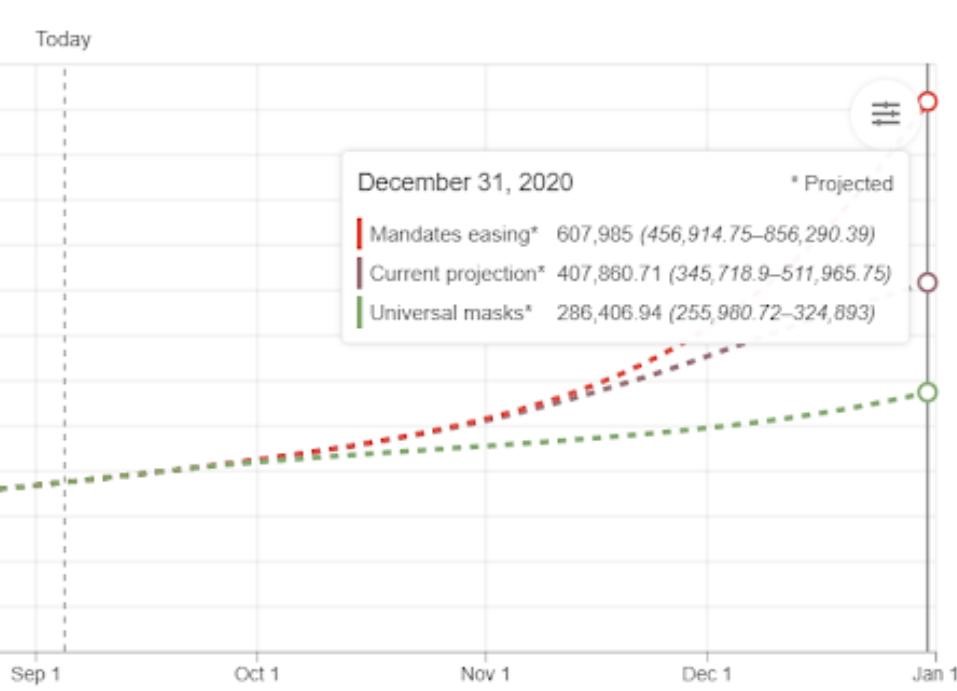 Projected total deaths related to COVID-19
(Image by Institute for Health Metrics and Evaluation)   Details   DMCA
tps://www.latimes.com/california/story/2020-09-05/l-a-teachers-union-opposes-small-groups-of-students-on-campus?fbclid=IwAR1yXU6XQfAyd3x1QJH-QQ4XLc0CwzcEkuc0tMnXv01XFxt4GjXKZpc-TEw">We understand that there are both teachers and kids for whom the risk of a return to campus will be too great right now, but a voluntary return for the highest-needs students should be allowed with safety measures in place."
- Speak Up

With the number of new COVID-19 cases finally declining in Los Angeles County, it is easy to get lulled into a false sense of security. But the truth is that six months and over 190,000 deaths into this crisis, we are far from finding the light at the end of the tunnel. In fact, the latest projections from The Institute for Health Metrics and Evaluation (IHME) have the country facing a total of 407,860 dead Americans by the end of the year. If we let our guard down and ease current mandates, the number of deaths due to COVID-19 could increase to 607,985.

Even with the continuing threat to LAUSD students and their families, Nick Melvoin's Speak Up is pushing the district to open campuses to children with special education as quickly as possible. Such a move would endanger the health of these students, many of whom are medically fragile. The cognitive and behavioral challenges faced by many of these students will make it difficult for them to understand or comply with social-distancing requirements. Bringing these children back into school buildings without a thorough plan formulated with the advice of experts could be disastrous for the students and for the district. 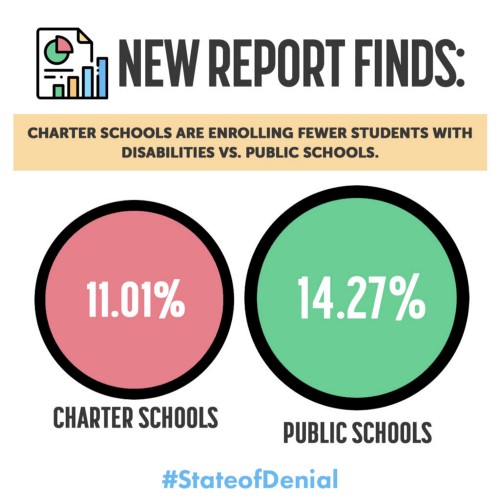 If Melvoin really cared about children with special-education needs he would not have tried to forcibly evict a Career Transition Center in order to replace it with a vanity project on the same campus. He certainly would not have divulged confidential information to the California Charter School Association to help them fight an attempt by the LAUSD to use bond funding to make school facilities more accessible for those with disabilities. It makes it difficult to take Speak Up's position on the subject seriously when their benefactors in the charter school industry enroll fewer students with disabilities than their public school counterparts. This is especially true for children with severe needs.

Given this historical lack of concern for children with special-education requirements, why has Melvoin and his supporters suddenly taken an interest in the needs of children with disabilities in the middle of a crisis? Perhaps, the answer can be found in the experience of another county.

In July, the Orange County Board of Education ignored established recommendations and issued "a set of controversial guidelines recommending county public school students return to campuses without basic coronavirus precautions". Under this proposal, students would not be required to wear masks when returning to the classroom. The board member responsible for the recommendation says she saw it as a bargaining tool: "See if there's a free charter school somewhere you feel you can commute to see if their [SIC} planning to open." The person who wrote the white paper from which they were taken said that if parents did not like the decisions made by the public schools then they should "Find a...charter school." He saw this as a way "to make those union schools pay for their failings."

The charter-school industry that financed Melvoin's campaign for office is not interested in taking on the responsibility (and high costs) of educating these students, so his motivations are not exactly the same as his compatriots in Orange County. However, fostering dissent within Los Angeles public schools allows charters to market themselves as offering stability. This strategy works especially well if pushing the district to act before proper plans are enacted results in an outbreak or other disaster. Forcing the district to finance this plan by taking away money available for general-education students also creates a financial advantage for charter schools and their lower population of students with special-education needs.

If Melvoin and his supporters are following the Orange County example of sabotaging public schools to push parents towards charters, it would call into question the way that Melvoin, Monica Garcia, and Kelly Gonez pushed through a measure to cut funding of the Los Angeles School Police by $25 million. While the protests surrounding the murder of George Floyd made it apparent that systematic changes needed to be made to the department, there were already plans in place to study the best way to accomplish the goal of a better system. Board members Scott Schmerelson, George McKenna, and Richard Vladovic wanted to see a plan that ensured student safety was not jeopardized before taking action. Instead, the three charter-school-supported board members pushed through a plan so poorly thought out that, after it passed, "district officials could not provide an answer...as to whether officers would keep weapons".

These three cases highlight the problem of charter-school proponents sitting on a board that is supposed to represent the 80% of students who attend LAUSD public schools. For the election coming up in November, the charter-school industry is expected to spend millions to regain a majority on the board. A win by either one of their candidates, Marilyn Koziatek or Tanya Ortiz Franklin, would further enhance the ability of these publicly funded private schools to sabotage their public-school competitors. The results will be devastating to the future of public education in Los Angeles.