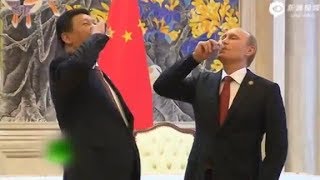 Ukrainian military ships have violated Russian restrictions in the Sea of Azov and Articles 19 and 21 of the UN Convention on the Law of the Sea. The Ukrainian Navy crossed the Russian sea border and entered a closed area of Russian territorial waters. Clearly, Washington was behind this as Ukraine would not undertake such a provocation on its own. Here is an accurate explanation of the event.

The Russian Navy detained the Ukrainian ships. Of course, the Western presstitutes, most of whom are CIA assets, will blame "Russian aggression." Washington and its presstitutes are doing everything they can to make impossible Trump's expressed goal of normal relations with Russia. NATO spokesperson Oana Lungescu quickly aligned NATO with Ukraine: "NATO fully supports Ukraine's sovereignty and its territorial integrity, including its navigation rights in its territorial waters."

The US military/security complex prefers the risk of nuclear war to any diminution of its $1,000 billion annual budget, a completely unnecessary sum that is destined to grow as the presstitutes, in line with the military/security complex, continue to demonize both Russia and Putin and to never question the obvious orchestrations that are used to portray Russia as a threat.

The Russian government's response to Ukraine's provocation and violation of law was to call an emergency meeting of the UN Security Council, as if anything would come of this. Washington pays such a large percentage of the UN budget, that few countries will side against Washington. As President Trump's crazed UN ambassador Nikki Haley said, "we take names."

From all evidence, the Russian government still, despite all indications to the contrary, believes that presenting a non-threatening posture to the West, which appeals to law and not to arms, is effective in discrediting Western charges of aggression against Russia. If only it were true, but no sooner than a high Russian official announced that, despite the overwhelming elections for independence from Kiev in the breakaway Russian provinces of Ukraine, Russia would not recognize the independent republics of Donetsk and Luhansk than "the Ukrainian army opened massive artillery fire on Sunday, shelling residential areas of the self-proclaimed Donetsk People's Republic."

This policy reassures the Zionist Neoconservatives who rule Washington's foreign policy that Russia is incapable of defending its interests.

The Putin government seems to think that in order to prove that it is democratic, it must tolerate every Russian traitor in the name of free speech.

This makes Russia an easy mark for Washington to destabilize. We see it already in Putin's falling approval ratings in Russia. The Russian government permits US-financed Russian newspapers and NGO organizations to beat up the Russian government on a daily basis. Decades of American propaganda have convinced many in the world that Washington's friendship is the key to success. The Russian Atlanticist Integrationists believe that Putin stands in the way of this friendship.

China is also an easy mark. The Chinese government permits Chinese students to study in the US from whence they return brainwashed by US propaganda and become Washington's Fifth Column in China.

It sometimes seems that Russia and China are more focused on gaining wealth than they are on national survival. It is extraordinary that these two governments are still constrained in their independence and remain dependent on the US dollar and Western financial systems for clearances of their international trade.

As Washington controls the explanations, surviving Washington's hegemony is proving to be a challenge for both countries.

Related Topic(s): NATO; Presstitutes; Putin; Russia And China; Russia Hacking; Ukraine, Add Tags
Add to My Group(s)
Go To Commenting
The views expressed herein are the sole responsibility of the author and do not necessarily reflect those of this website or its editors.