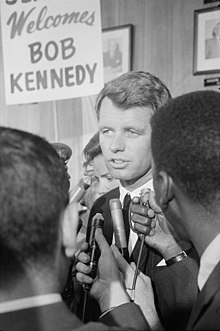 We'll never know how the last half-century might have been different if Robert Kennedy hadn't been assassinated 52 years ago in Los Angeles (June 6, 1968) right after winning California's Democratic presidential primary.

I worked on RFK's presidential campaign and I've been thinking about him in the context of the events of the past two weeks. It is reasonable to believe that...

That doesn't mean that RFK would have eliminated poverty and racism, but it would have been an important part of his policy agenda and moral vision.

By the time he ran for president, he was a very different person than he had been working for Senator Joe McCarthy in the 1950s or serving as his brother John F. Kennedy's Attorney General. His few years as a Senator from New York, from 1965 until his death, transformed him. He had become a healer, a bridge-builder, and, politically, a social democrat, committed to addressing both poverty and racism. His travels to poverty-stricken areas in both rural and urban America moved him, as did his visits to rural California to meet with Cesar Chavez and migrant farm-workers. He sponsored legislation to provide low-income communities with funding for bottom-up community development job and housing programs. In a speech to South African students in 1966, he had voiced strong opposition to that country's racist apartheid regime. Over the next two years, he had gradually come around to speaking out against the war in Vietnam.

In 1967, as President Lyndon Johnson was escalating American combat troops, anti-war activists urged him to run for president. He declined, so the peace groups put their support behind Sen. Eugene McCarthy of Minnesota. McCarthy won 42% of the vote, compared with 49% for Johnson, in the New Hampshire primary, revealing that the president was politically vulnerable. Four days later, Kennedy announced that he would seek the Democratic nomination for president. Two weeks later, on March 31, Johnson announced that he wouldn't seek the party's nomination. That made the contest a three-way race between Kennedy, McCarthy, and Vice President Hubert Humphrey, a stalwart liberal who had reluctantly chained himself to LBJ's unpopular Vietnam policy.

The assassination of Martin Luther King on April 4 elevated Kennedy's campaign into a moral crusade of peace and racial healing. The previous year, riots had erupted in Newark, Detroit, and other cities, many of them triggered by an incident of police brutality.

Kennedy learned about King's death while he was campaigning in Indiana. Local police and his campaign staffers urged him to cancel a rally in Indianapolis' African American ghetto. But Kennedy ignored their advice. He climbed on a flatbed truck and broke the news about King's assassination to a stunned crowd. The tone of his voice, his body language, and the words of his impromptu speech calmed the crowd.

"I have some very sad news for all of you," he began. "Martin Luther King was shot and was killed tonight in Memphis, Tennessee."

"In this difficult day, in this difficult time for the United States, it is perhaps well to ask what kind of a nation we are and what direction we want to move in," he continued. "For those of you who are black -- considering the evidence there evidently is that there were white people who were responsible -- you can be filled with bitterness, with hatred, and a desire for revenge. We can move in that direction as a country, in great polarization -- black people amongst black, white people amongst white, filled with hatred toward one another."

That night, triggered by King's murder, riots erupted in over 100 cities, but not in Indianapolis. Kennedy won the Indiana primary, by winning Black votes but also by attracting support among working class white voters, many of whom had supported segregationist George Wallace's campaign four years earlier.

A week later, Kennedy won the Nebraska primary. On June 4 he lost the New Jersey primary but prevailed in South Dakota and California. He was celebrating those victories at the Ambassador Hotel in Los Angeles when he was shot a few minutes after midnight -- officially June 5.

Peter Dreier is E.P. Clapp Distinguished Professor of Politics, and director of the Urban & Environmental Policy program, at Occidental College. His most recent book is  The 100 Greatest Americans of the 20th Century: A Social Justice Hall of Fame  (Nation Books). Other books include: Place Matters: Metropolitics for the (more...)
Related Topic(s): Assassination; Democratic; Government; Kennedy Assassination; Nomination; Racial Equality; Robert F Kennedy Jr, Add Tags
Add to My Group(s)
Go To Commenting
The views expressed herein are the sole responsibility of the author and do not necessarily reflect those of this website or its editors.