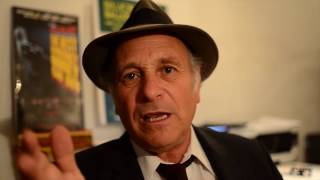 I was living in Hollywood, this was years ago, working as a sandwich-sign man, jazz drummer and a sperm donor. God knows why, but my girlfriend decided to try out for a film. This is about her encounter with Harvey Weinstein -- or, more correctly, one of the 120,000 Weinsteins trolling the arts.

[Caution: language not for the squeamish.]

"STICK WITH ME ON THIS:
"IF YOU WERE ON A DESERT
"ISLAND AFTER A PLANE CRASH YOU WOULD DO
"ALL THESE HORRIBLE THINGS.
"YOU WOULD EAT DEAD BODIES. YOU WOULD f*ck
"DEAD BODIES."

Why are we listening to this freak?
Because he is an EMPLOYER
and we are under-employed.

What he wants to know is, are we willing
to play girl corpses
with our vaginas sticking up out of the sand.

So when we step out into the California storm,
and hear him screaming back in his production office,
my little sisters don't know that
I have psychokinetically twisted his eyes back into his head

and as his sockets drip blood and mascara, he is looking
straight into his own brain and he can't stop screaming.

And you know what else I can do?
I can read flags.

Greg Palast's investigative reports appear in Rolling Stone, the Guardian and on BBC Television. His latest film, The Best Democracy Money Can Buy, on how Donald Trump stole the 2016 election, is available on Amazon. Palast is Patron of the Trinity (more...)
Related Topic(s): Brain; Death; Harvey Weinstein; Poet, Add Tags
Add to My Group(s)
Go To Commenting
The views expressed herein are the sole responsibility of the author and do not necessarily reflect those of this website or its editors.