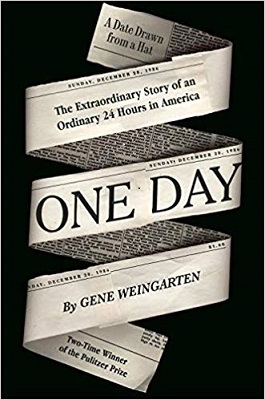 What happened on December 28, 1986?
(Image by Gene Weingarten)   Details   DMCA
Gene Weingarten, One Day: The extraordinary story of an ordinary 24 hours in America, Blue Rider, 2019.

Denied entry to the US (who knows why, and welcome to the club),* I must take solace as a writer, traveller, travel writer, in others' experiences in the creaking monster to the south (of Canada, but, hey, of most of the exploited world). In the writings of those 'lucky' enough in live there or at least visit at will.

Weingarten starts from literally scratch, pulling a year, month and date out of a hat with scribbled numbers on bits of paper. The only limit was in the year; between 1969 and 1989, 'far enough in the past to feel like 'history' and have a future to explore, but not so far so witnesses would be hard to find.'

He landed on December 28, 1986, at first, in disappointment, as it was a Sunday (bad 'news' day) and worse yet, the news doldrums of post-Christmas. But he forged ahead, assuming fate had something to tell him. He started out interviewing a few HSAM (Highly Superior Autobiographical Memory) types he saw in 60 Minutes, but even they drew a blank (!)

But after 6 years of research and writing, it turns out Weingarten hit a winner, though his journalist talent alone could turn a pig skin into a gold mine.

He cleverly sketches out a full range of Americana: lots of murders, of course, but also a historic moment in medicine (longest surviving heart transplant), crazy politics of race (Koch blowing his chances at a fourth term as mayor of New York), miraculous escapes from death, a vicious lawyer turned nice transwoman, lots of ex-soldiers, corrupt police " A page-turner from start to finish.

You can't help but love all his characters (okay, a couple murderers excepted). And be overwhelmed by the feeling of a huge (too huge) nation wildly careering into a dystopic future, full of half-digested bits of flotsam washed up on the shores of what was once the world's last pristine continent, and is now " Read it and laugh and cry.

One Day starts with a Romeo and Juliet American-style drama (insanely jealous Mark shoots Karen then himself, but only his brain, so his body is kept alive to allow harvesting the still-beating heart). You witness the delicate, urgent dance with donor's family, recipient, the logistics of the getting-the-live-heart-to-hospital, then the breathtaking operation itself, all the ifs and buts.

To top it off, a 'white' male heart going into a black female body, to the tune of a twangy country ballad, thanks to Lefrak, 'a liberal northeastern Jewish urban Yankees fan who happened to have a taste for country music.' 28 years later, Lefrak now retire, a country gentleman volunteering at a local clinic with his wife, and the new heart owner, Eva, once again a nurse, accepting and thankful for 'Romeo':

Someone loved someone so hard they couldn't bear to live without them. [Such a crime] comes out of something good. And something good came out of that.

The creepy, lecherous episode was courtesy of patrolman Craig Peyer, who ambushed young blondes driving alone along a bit of highway near a disused exit, terrorizing them but not going the whole hog until the fateful encounter with Cara Knott, whose training in resisting a rapist ended up getting her strangled and dumped in a nearby canyon.

This was before the days of DNA testing, but there was tons of circumstantial evidence and he was convicted. Peyer insisted on his innocence, but when DNA testing was developed, he refused. A nice irony,

just as Nazis' meticulous record-keeping created evidentiary problems for them when they faced tribunals of justice, Peyer's hot pencil had given prosecutor Pfingst a gift. By stopping so many cars that night [for minor infractions, to issue tickets and suss out possible victims], Peyer allowed Pfingst to create a convincing timeline.

Instead of 'finding a complement in each other,'Cynthia and Don-Paul's midlife-crisis marriage became 'an unnerving echo of the darker part of themselves.' Cynthia was keeping a diary, providing a pre-internet trail of her brief attempt to find love again. 28 years later, she and Don-Paul are still single, her daughter happily married. A dismal but sort-of happy ending. 'Life is essentially a fatal disease of indeterminate duration. You can either cry at the unfairness of this or laugh at its absurdity.

Related Topic(s): America; American Dream; American Evolution; American_History; Decline; Police, Add Tags
Add to My Group(s)
Go To Commenting
The views expressed herein are the sole responsibility of the author and do not necessarily reflect those of this website or its editors.