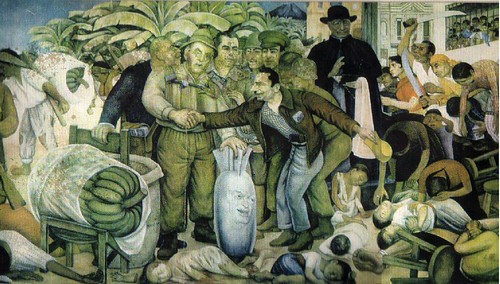 In 1998, the Nazi War Crimes and Japanese Imperial Government Records Interagency Working Group (IWG), at the behest of Congress, launched what became the largest congressionally mandated, single-subject declassification effort in history. As a result, more than 8.5 million pages of records have been opened to the public under the Nazi War Crimes Disclosure Act (P.L. 105-246) and the Japanese Imperial Government Disclosure Act (P.L. 106-567). These records include operational files of the Office of Strategic Services (OSS), the CIA, the FBI and Army intelligence. IWG issued three reports to Congress between 1999 and 2007.

This information sheds important light and confirms one of the biggest-kept secrets of the Cold War - the CIA's use of an extensive Nazi spy network to wage a secret campaign against the Soviet Union.

This campaign against the Soviet Union, which began while WWII was still raging, has been at the crux of Washington's tolerance towards civil rights abuses and other criminal acts in the name of anti-communism, as seen with McCarthyism and COINTELPRO activities. With that fateful decision, the CIA was not only given free reign for the execution of anti-democratic interventions around the world, but anti-democratic interventions at home, which continues to this day.

With the shady origin of the Cold War coming to the fore, it begs the questions; 'Who is running American foreign policy and intelligence today? Can such an opposition be justified? And in whose interest did the creation of the Cold War serve and continues to serve?' This paper is part one of a three-part series which will address these questions.

Allen Dulles was born on April 7th, 1893 in Watertown, New York. He graduated from Princeton with a master's degree in politics in 1916 and entered into diplomatic service the same year. Dulles was transferred to Bern, Switzerland along with the rest of the embassy personnel shortly before the U.S. entered the First World War. From 1922 to 1926, he served five years as chief of the Near East division of the State Department.

In 1926, he earned a law degree from George Washington University Law School and took a job at Sullivan & Cromwell, the most powerful corporate law firm in the nation, where his older brother (five years his senior) John Foster Dulles was a partner. Interestingly, Allen did not pass the bar until 1928, two years after joining the law firm, however, that apparently did not prevent him in 1927 from spending six months in Geneva as "legal adviser" to the Naval Armament Conference.

In 1927 he became Director of the Council on Foreign Relations (whose membership of prominent businessmen and policy makers played a key role in shaping the emerging Cold War consensus), the first new director since the Council's founding in 1921. He became quick friends with fellow Princetonian Hamilton Fish Armstrong, the editor of the Council's journal, Foreign Affairs. Together they authored two books: Can We Be Neutral? (1936) and Can America Stay Neutral? (1939). Allen served as secretary of the CFR from 1933-1944, and as its president from 1946-1950.

It should be noted that the Council on Foreign Relations is the American branch of the Royal Institute for International Affairs (aka: Chatham House) based in London, England. It should also be noted that Chatham House itself was created by the Round Table Movement as part of the Treaty of Versailles program in 1919.

By 1935, Allen Dulles made partner at Sullivan & Cromwell, the center of an intricate international network of banks, investment firms, and industrial conglomerates that helped rebuild Germany after WWI.

After Hitler took control in the 1930s, John Foster Dulles continued to represent German cartels like IG Farben, despite their integration into the Nazi's growing war machine and aided them in securing access to key war materials. (1)

Although the Berlin office of Sullivan & Cromwell, (whose attorneys were forced to sign their correspondence with "Heil Hitler") was shut down by 1935, the brothers continued to do business with the Nazi financial and industrial network; such as Allen Dulles joining the board of J. Henry Schroder Bank, the U.S. subsidiary of the London bank that Time magazine in 1939 would call "an economic booster of the Rome-Berlin Axis." (2)

The Dulles brothers', especially Allen, worked very closely with Thomas McKittrick, an old Wall Street friend who was president of the Bank for International Settlements (BIS). Five of its directors would later be charged with war crimes, including Hermann Schmitz, one of the many Dulleses' law clients involved with BIS. Schmitz was the CEO of IG Farben the chemical conglomerate that became notorious for its production of Zyklon B, the gas used in Hitler's death camps, and for its extensive use of slave labour during the war. (3)

David Talbot writes in his "The Devil's Chessboard":

Related Topic(s): Cia; Fascist; Hitler; Nazis, Add Tags
Add to My Group(s)
Go To Commenting
The views expressed herein are the sole responsibility of the author and do not necessarily reflect those of this website or its editors.