It no coincidence that our entertainment industry today, so heavily saturated with the influence of Wells' propaganda, is obsessed with the theme of a post-apocalyptic world, Cynthia Chung writes. 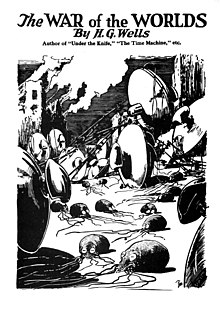 "It has become apparent that whole masses of human population are, as a whole, inferior in their claim upon the future, to other masses, that they cannot be given opportunities or trusted with power as the superior peoples are trusted, that their characteristic weaknesses are contagious and detrimental to the civilizing fabric, and that their range of incapacity tempts and demoralizes the strong. To give them equality is to sink to their level, to protect and cherish them is to be swamped in their fecundity. "

- H.G. Wells' in "Anticipations of the Reaction of Mechanical
and Scientific Progress upon Human Life and Thought" 1901

In "The Shape of Things to Come: The Ultimate Revolution" (published in 1933), H.G. Wells writes of the future predicting, rather optimistically, that there will be another world war in just a few years, followed by epidemic and famine. In this fictional future, war continues for thirty years into the 1960s, despite the people having forgotten why they started fighting. Humanity enters a new Dark Age. In a last bid for victory, the enemy deploys a biological weapon resulting in the "wandering sickness," producing the first zombies, and by 1970 the global population has dropped to a little under one billion.

Though this is depicted as horrific, it is at the same time depicted as a necessity - a "great reset," to restore the "balance" so to speak. It is only with this reduced population size that the world can begin to build itself back together from the chaos that it was, and enter into its new phase of evolution as a biologically superior species (the inferior having been culled by war and disease), managed by a bureaucratic system under the form of a world government.

This is the sci-fi fantasy of H.G. Wells and is the central theme to everything he wrote including his works of non-fiction. The subject on ways to reduce the world population was a troubling dilemma for Wells"not the reducing part, but the thought that there would be those so foolish as to forbid it.

You see, it was considered by some that the human species had found itself in a crisis by the 1900s. Europe, up until the 17th century had a population size that never exceeded roughly 100 million. But nearly doubled to 180 million in the 18th century, and doubled again to 390 million in the 19thcentury. H.G. Wells wrote of this "the extravagant swarm of new births" as "the essential disaster of the nineteenth century." (1) Not war, not disease, not starvation, not abject poverty, but population growth was determined as the disaster of an entire century.

Today the world population is 7.9 billion people, a far cry from Wells' hopeful 1 billion. However, there is good news! The worldometers.info site predicts a decreasing net change in population growth, such that by year 2050 the yearly change will be 0.50% of what it is now! In other words, the rate of population growth will be cut in half 29 years from now! Those are striking projections and would entail a massive cap on growth! Obviously, this is a projection based off of the presumed success of "educational reforms." Though I do wonder"what will we do if not all of the individuals agree to abide by these reforms? And what will we do if not all of the nations agree to abide by these reforms? Will we enforce it nonetheless, and if so"by what methods?

The Ghosts of Wells' Past

"The knowledge of today is the ignorance of tomorrow"

The Wells that we have come to know today started his journey as a young boy winning a scholarship to study at the prestigious Normal School of Science (now called the Royal College of Science). His subject of choice was biology and his teacher, and quickly thereafter mentor, was none other than Thomas Huxley, otherwise known as "Darwin's bulldog" (his words).

Through Huxley, Wells' conception of the nature of humankind was formed with its foundation built upon the philosophies of Charles Darwin and Thomas Malthus.

Because Wells is so very influenced by these men, in fact they form the very basis for his ethics; I thought it apt to share with you a few quotes.

Related Topic(s): Famine; Government; Malthus; Poverty; Race, Add Tags
Add to My Group(s)
Go To Commenting
The views expressed herein are the sole responsibility of the author and do not necessarily reflect those of this website or its editors.