Introduction: This is the second in an occasional series that I will be running of past columns that I published both on OpEdNews and other sites, that bear relevance to current events. There will be very slight, if any, editing, and contemporaneous notes in [ ]. The "current event" to which this column realities is, of course, Jim Comey's book A Higher Loyalty and his subsequent far-ranging book tour interviews. Regardless of Comey's intervention against the 2016 Clinton Campaign, the subject of this column, with his broad-ranging analysis/critique of Trump, his campaign, his government, and himself, he has made no friends in the Trump Camp. As for the Democrats, reaction has gone both ways. But this column, written between the time that Comey announced the "Anthony Wiener computer second Clinton emails investigation" on October 28, 2016, and its withdrawal, four days before the election held on November 8, 2016, I ventured some guesses as to how his intervention(s) might impact the then-upcoming the election.

On July 5, 2016, The Director of the U.S. Federal Bureau of Investigation, James Comey, shooting like a comet over Washington, D.C., announced that after an extensive investigation, no criminal charges relating to the improper use/protection/transmission of classified documents would be brought against former Secretary of State Hillary Clinton.At the same time, in a speech he launched into an extensive negative analysis of what had been done with emails, sensitive or not, on State Department or private servers, by Mrs. Clinton and members of her staff. That statement, very unusual for an FBI Director to make, had a transitory effect on Clinton's poll numbers. But at the same time, the Director, in a highly unusual action, little noticed at the time, told leading Republican on the House Intelligence Committee that it would keep them informed of any further developments. 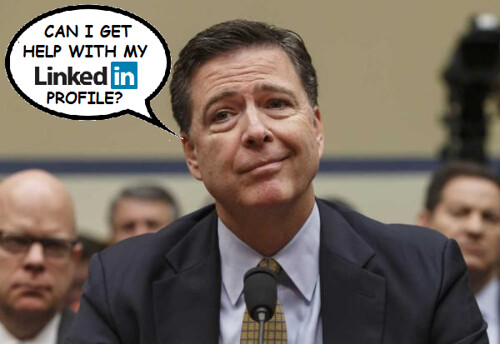 FBI Director James Comey Seeks New Opportunities (although what is happening with his book assures him that he won't have to get a new job right away).
(Image by Mike Licht, NotionsCapital.com)   Details   DMCA

As is well-known, just now there have been further developments. On October 28, 2016, Mr. Comey announced publicly that there would be a further investigation of (possible) Clinton emails. He made this announcement before any investigation had begun, much less concluded, and before his agents had obtained even so much as a [search] warrant for seizing a lap-top that happened not to belong to Mrs. Clinton. Rather it belonged to the estranged husband, Anthony Weiner, of one of Mrs. Clinton's closest aides, Huma Abedin. This action by Comey was considered to be highly unusual, to say the least, by a variety of sources/authorities, including, for example, The New York Times editorial page. It was even unclear as to whether, after some kind of preliminary evaluation, the previous formal inquiry would be reopened.

The U.S. Justice Department strongly discouraged Comey from making such an speculative announcement (as in "there might be a further investigation after we've had a look at Mr. Weiner server which -- who knows -- might simply be filled with photos of Mr. Weiner's private parts taken from a wide variety of angles"). It appeared as if Mr. Comey himself might be violating the law, that is the 1939 Hatch Act, which prohibits government employees from taking actions close to elections which might influence their outcomes. A Republican, Richard Painter, who worked as the Chief Ethics Officer in the Bush White House (and a Clinton supporter this time around [--- now a frequent Trump critic]), went so far as to file a formal ethics complaint against Comey, for apparent violation of the Hatch Act (which would be a criminal offense). [To my knowledge, nothing ever came of that filing.]

There have been a variety of political outcomes from the Comey action, ranging from no change in the Clinton/Trump poll numbers to significant changes in them, from no change in the generally predicted Clinton lock on the Electoral College vote to possibly enough of a Trump swing in the swing states to give the election to him. Most observers are not attributing ulterior motives to Mr. Comey. "He made a simple mistake." "He was trying to be open about what is going on, but he was premature in making such an announcement -- poor judgement." "He was under pressure from Congressional Republicans. Suppose that he had not announced the further investigation [of a bunch of emails that might not even be Clinton's] in advance of its being undertaken, and then something had come of it after the election? Boy, would they be mad [or worse]."

Well, folks, I don't buy any of it. I think that what Comey did, from the July "even though we have nothing criminal on you you're a bad girl" speech to the present "we are announcing that an investigation will be starting [once we get a warrant], without any idea that anything further that might be incriminating might be found" is all part of a plan. (And yes, this is a conspiracy hypothesis, but not quite the kind that Alex Jones would come up with.) In 2013 Mr. Comey was given the customary ten-year term appointment as FBI Director by President Barack Obama. (Wonder why in all of this bruhaha from the Democrats Obama gave him a vote of confidence?) A career Federal prosecutor and occasional corporate lawyer who eventually became Deputy Attorney General under Bush, he is a Republican. He has had a reputation for highly ethical behavior.

But, and it's a big but, first of all as a prosecutor Comey has been on the Clintons' case for years. According to Evan Stark, a Professor Emeritus of Public Affairs at Rutgers, Comey was the prosecutor on the famous "Whitewater" case--- that led to nothing. He was also the prosecutor of the "Marc Rich pardon" case, which, however distasteful the pardon was, and it was, led to nothing. But more importantly now, it is important to note that Mr. Comey does not live in a bubble. 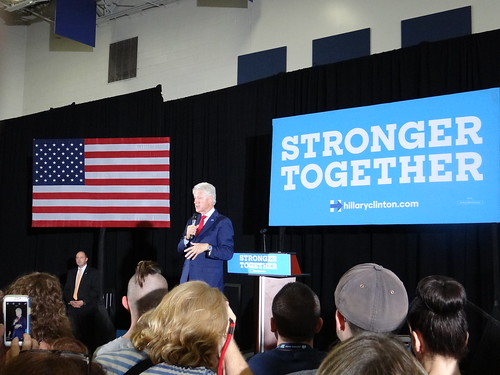 He had to have known that what he was doing when he gave his totally unnecessary speech at the time he announced "no criminal findings" in the original Clinton emails/server case. He could simply have made the announcement, or have had his public affairs officer make it, and left it at that. But he did make his speech, and while it did not seem to have any long-term political effects, it did stir the political pot at the time. This [current] announcement has the pot boiling. It could swing the election to Trump. Although the conventional wisdom as of Nov. 1, when this column is being written, is that it won't, because of Clinton's heavy advantage in the Electoral College, Glenn Beck, an arch-reactionary who happens to be anti-Trump, thinks that Comey's announcement is "one of the most irresponsible things to ever happen" and could swing the election to Trump. And although unlikely, it could.

So how did this happen? Well, Comet Comey has a phone (you can be sure that he doesn't do political stuff by email), and it is as secure a one as can be found. As I have pointed out previously, there is an increasingly large sector of the ruling class, led by some very wealthy hedge fund managers like the one who came to the Trump campaign along with Steve Bannon(from the Cruz campaign) that REALLY wants Trump to win. The two biggies for them: further huge tax cuts for the wealthy and the end of economic/environmental regulation as we know it. My guess is that they got to Comey. What they offered or promised him, if anything at all, is impossible to know. But I do believe that that is what happened.

Comey is a long-time Federal lawyer. He is now the Director of the FBI. He had to know about the Hatch Act, and that he would be violating it. He also knows that regardless of the outcome of the election he would never be prosecuted for doing so. Until last Friday, Trump was sinking and a number of down-ticket Republicans were going with him. Now, as the result of the "announcement" of something that might or might not happen, Trump is making huge hay of it and could win, and even more importantly the Republicans have a much better chance of holding on to the Senate.

Postscript [to the Nov. 1, 2016 column]: According to the FBI, there is no direct connection between Donald Trump and the Russian Government/business sector. According to a long-time counter-intelligence operative of another country, there are numerous documents showing just such relationships and he gave them to the FBI. Here's one excerpt:

"Mother Jones has reviewed that report and other memos this former spy wrote. The first memo, based on the former intelligence officer's conversations with Russian sources, noted, '[the] Russian regime has been cultivating, supporting and assisting TRUMP for at least 5 years. Aim, endorsed by PUTIN, has been to encourage splits and divisions in western alliance.' It maintained that Trump 'and his inner circle have accepted a regular flow of intelligence from the Kremlin, including on his Democratic and other political rivals.' It claimed that Russian intelligence had 'compromised' Trump during his visits to Moscow and could 'blackmail him.' "

This [which became known, of course, as "The Steele Dossier"] is stuff for an actual investigation. Is there any evidence that one is underway? Well, it would be improper for the FBI to comment on investigations that are still in process (only on those that have not yet begun). The mainstream media --- so biased against Trump donchaknow (ho, ho, ho) --- have not yet picked up on this one. But hey, you never know. Do stay tuned (and remember, I wrote this on November 1).

[One last current editorial comment. Comey made sure that all the bits and pieces of the "Clinton email matter investigation/non-investigation" were made public. However, the investigation of links between the Trump campaign and "Russia," that we now know had first been brought to the FBI's attention from a drunken spiel uttered by one George Papadopoulos the previous Spring, plus what information not yet released that they might have gathered from the tapped phone of Carter Page, beginning in 2013, during the 2016 campaign was never made public. Happenstance? You decide.]

This column was originally published on The Greanville Post, on November 1, 2016, one week before the Presidential election that was held on November 8, 2016, at: click here.

Steven Jonas, MD, MPH, MS is a Professor Emeritus of Preventive Medicine at StonyBrookMedicine (NY) and author/co-author/editor/co-editor of over 35 books. In addition to his position on OpEdNews as a "Trusted Author," he is a Senior Editor, (more...)
Related Topic(s): 2016 Campaign; 2016 Election; 2016 Election Hack; Anti-trump; Class; Classified Information; Democrats; Ethics; FBI; Ruling Elites, Add Tags
Add to My Group(s)
Go To Commenting
The views expressed herein are the sole responsibility of the author and do not necessarily reflect those of this website or its editors.