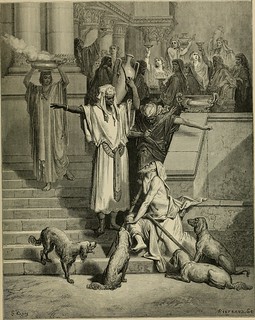 Image from page 268 of .The Bible panorama, or The Holy Scriptures in picture and story. (1891)
(Image by Internet Archive Book Images)   Details   DMCA

One conversation that has come up in Ferguson is the need for " kids to respect authority, regardless of the circumstance."

I don't think so, not in Ferguson, not anywhere.

Respect dedication and caring-- yes. Respect the caring and perseverance that goes into dedication. Value it. Respect the person who is dedicated to you. But still question.

But we live in a world where morality is threatened and often missing, where power is abused and government and laws which benefit non-human interests over humans are passed and enforced.

Why would you respect such authority, when the authority is made to protect corporations with major psychopathic characteristics, which have no interest in the needs of humans, outside of keeping them viable as customers? Fear authority, be wary of authority, expect abuse and exploitation of authority, yes. But those are different from respect.

Respect authority? Like the criminal, murdering cops in Ferguson MO? They should and do inspire fear, but also contempt, not respect. And the authority hierarchy, ascending to the Mayor, the Governor, all the way to US attorney Eric Holder, and his boss, Barack Obama, all failing to do the right thing-- arresting the cop who killed Michael Brown, arresting the police in Ferguson who have arrested journalists, violating their first amendment rights. Should anyone respect them? For what, Their conscious choosing to not do the right thing? I don't think so.

And now we learn that Ferguson Feeds Off the Poor: Three Warrants a Year Per Household. ". Per household? What sick system is in place there? Certainly not one where accepting authority is good for the citizenry.

It verges on malpractice to teach children to respect authority. Who might perform such child abuse?

Let's start with narcissists. They need and demand that the people around them adulate them and treat them as omnipotent and all important The "respect authority" message synergizes with this kind of person. And keep in mind that just about all psychopaths and sociopaths also manifest narcissist behaviors and tendencies.

Next, we have the hierarchical religions and personality cult religions, like we often see in evangelical megachurches, Orthodox Jewish sects and Mullah-led Muslims. Jim Jones was an extreme example. Telling people to respect authority is a natural way to reinforce and police hierarchy and domination..

Public schools have, for over 100 years, been designed using the Austro-prussian model designed to produce obedient soldiers and factory workers, as compared to thinking, challenging, engaged citizens, as Paolo Freire has argued are necessary to conquer oppressive systems. Getting people to respect authority-- to accept what they are told is the way it is supposed to be-- fits very nicely with the goals of public education. And of course, much private education, in religious schools is even more interested in inculcating respect for authority.

Yet the calls for learning to respect authority came from ministers within the community of Ferguson. What misguided thinking. Children should be taught to respect wisdom, to respect justice, to respect kindness and compassion-- warmheartedness, and the people who manifest hem. Yes. But simply the idea of authority? I don't think so.

In a bottom-up world, with bottom-up values, challenging authority is a positive behavior and trait. it seems to me that in a democracy, in an egalitarian society where justice is embraced as an important value-- social, ecological and economic justice-- questioning authority should be a duty, and "respecting authority" is a failure to live with bottom-up, inter-connected, interdependent, participatory values.

Related Topic(s): Bottom-up; Religion, Add Tags
Add to My Group(s)
Go To Commenting
The views expressed herein are the sole responsibility of the author and do not necessarily reflect those of this website or its editors.

STAY IN THE KNOW
If you've enjoyed this, sign up for our daily or weekly newsletter to get lots of great progressive content.
Series: "authoritarianism Patriarchy Hierarchy"