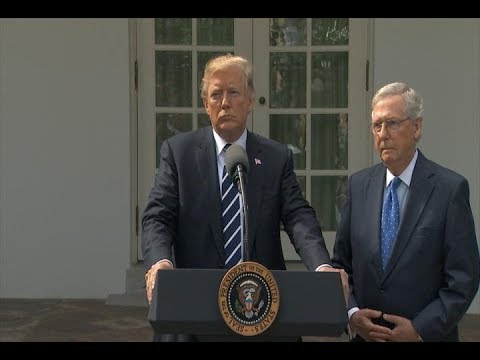 Mike McConnell will deliver the message to Trump and be by his side as Trump announces his resignation
(Image by YouTube, Channel: ABC News)   Details   DMCA

It will not be long before Trump is out of the White House and off the 2020 presidential ballot.

In spite of what virtually all the mainstream media have been saying about impeachment going nowhere in the Senate, I am very confident that Trump will not be president and will not be on the ballot for the 2020 presidential election.

Here's why. At least five polls have shown a fast, big shift in support by the public towards supporting both an impeachment investigation and full impeachment.

Worse, all the polls are showing Trump will lose the Whitehouse. The GOP does its own polling and I am sure it is seeing that not only Trump will lose, but if he is at the top of the ballot he will take down a huge percentage of the down ballot candidates on the ticket-- US Senators and Congresspeople, state legislators, governors, even school board members and judges. If Trump stays at the top of the ticket, it will energize a massive swell of anti-Trump voters.

But I don't think this necessarily means Trump will be impeached.

The GOP's polling will show that keeping Trump on the ballot will lead to the GOP losing the White House, losing further ground in the House and it will also lose the Senate. The internal polls the GOP runs will show this. They will have to take action. It could happen very quickly. Already, former AZ Senator Jeff Flake has said that if GOP Senators could vote anonymously, 35 of them would vote to impeach. Already some of the big talking heads on Fox News are saying that what Trump did was impeachable. This morning Lindsay Graham called Trump a liar for claiming that all of Isis had been removed from Syria. Several Republican Senators and House members have already come out with concerns about Trump's actions. These are tremors in what will become an eight on the Richter scale earthquake.

This will not take long. When Nixon and Clinton were facing similar situations, they put together robust defense teams. Trump has recruited his son-in-law. That's laughable. Tweeting insults and attacks on his investigators is not a viable defense strategy.

The Republicans are going to have to give Trump an ultimatum: resign and you will be pardoned by Mike Pence or, we already have the votes and we will have to impeach you and you will face charges.

Trump will cave and resign. Most likely Mitch McConnell will deliver the ultimatum to Trump and probably stand by Trump's side as Trump tells some lie about why he is resigning, after making the US the best it has ever been.

Mike Pence will become president and probably put his name up as a candidate for the 2020 election. It won't take long for Cruz and Rubio to get in the running. The domain Cruz2020.com has already been registered with ownership information redacted. My guess is former governor and UN ambassador Niki Haley will win the primary. That will massively change the polling. And whoever the GOP chooses it will wipe out Joe Biden's main campaign claim.

The best thing possible for Democratic party election hopes, for all levels on the ballot would be for Trump to stay in office and stay on the ballot. But I think events are rapidly emerging that will make that less and less likely.

I've written before how, with chaos theory, emergence of new trends can happen very quickly, so a 50% plus one majority is not necessary. (Fractal Revolution: A Systems, Non-Linear View of Change)

The ultimatum from the GOP to Trump could come before December and almost certainly before the Iowa primaries on February 3rd. The GOP will want to give its candidates time to get their campaigns running. I wouldn't be surprised if we start seeing at least one or two Fox News talking heads testing the waters, calling for the GOP to do the necessary, maybe Andrew Napolitano or Shep Smith.

But will taking out Trump be enough? He's rebuilt the swamp in Washington D.C.. Will Pence face the reality that there is massive enmity towards not only Trump, but his appointees, and replace them? If he doesn't, the GOP's removal of Trump will be less effective in ameliorating the damage Trump has done to GOP 2020 election prospects

Related Topic(s): Ambassador Nikki Haley; Donald Trump; Gov Nikki Haley; Impeach Trump; Impeachment; McConnell-Mitch; Republican; Republican Primaries; Republicans-GOP, Add Tags
Add to My Group(s)
Go To Commenting
The views expressed herein are the sole responsibility of the author and do not necessarily reflect those of this website or its editors.

STAY IN THE KNOW
If you've enjoyed this, sign up for our daily or weekly newsletter to get lots of great progressive content.
Series: "Trump Removal/ Impeachment"