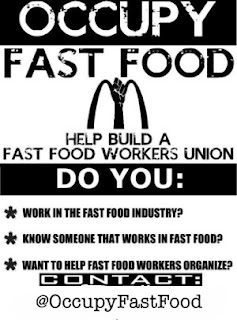 Recently the headlines have been filled with demands from fast-food employees for wage increases. In loose affiliation with the Occupy Movement, these employees have demanded wage increases nearly double their current wages.

As an adherent to Natural Law, the Constitution, and the Bill of Rights, this writer supports their right to request/demand such an increase. Yet, as an adherent to free markets, this writer's initial impression was that this segment of the free market cannot sustain a doubling in the wages of fast-food employees, such as demanded by McDonald's workers and the Occupy Moment. And from this perspective this writer was on the verge of dismissing this exercise in free-market forces as a moot point.

However, upon deeper reflection this writer has developed a new perspective on these wage-demand developments. To facilitate his point, this writer has delayed writing this analysis article to allow major media to trot out the status-quo usual suspects: Evil, duplicitous business vs. the naïve, downtrodden labor force. In trotting out the usual suspects, major media helps sustain and reinforce the status quo. Said status quo being the false left/right two major political-party paradigm. And now, with major media committed to its storyline, this writer will reveal the truth the two major parties and major media tries so hard to hide and bury.

As this writer's regular readers are aware, this writer often assesses issues from original perspectives, refusing to be locked into the false left/right political paradigm and traditional two major political-party dogma. This is one of those articles that will shatter most American's false left/right perception of reality. In so doing, it is this writer's hope that this allows WE THE PEOPLE to further advance our peaceful revolution to restore Natural Law, the Constitution, and the Bill of Rights and retake our country while restoring true free markets and fundamental economic fairness.

Can we agree that in this, the greatest nation in earth, our policies should be reflect an intention that all hard-working, dependable,  rank-and-file Americans who work for hourly wages generally should not see an erosion in their standard of living. (Unless of course, non- machinated market forces are the cause. For instance, industries in decline. As examples, buggy-whip makers and, more recently, traditional photography processors.) This writer takes the position that the demand for the products of the fast-food industry is not in decline.

Related Topic(s): Congress; Food; Money; Money; Occupy 2 Point 0; Occupy Atlanta; Occupy Chicago; Occupy May Day; Occupy Movement; Power; (more...) Power; Power, Add Tags  (less...)
Add to My Group(s)
Go To Commenting
The views expressed herein are the sole responsibility of the author and do not necessarily reflect those of this website or its editors.