This Michigan congressional nominee has a big vision for renewing and building upon the promise of the Civil Rights Act. 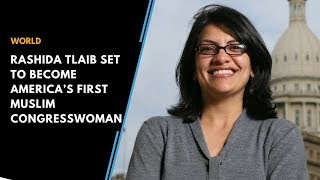 When Rashida Tlaib won a hard-fought Democratic primary race for an open seat representing Michigan in the US House of Representatives, she signaled that she will go to Congress as what she has always been: a speak-truth-to-power activist.

"I will fight back against every racist and oppressive structure that needs to be dismantled," Tlaib declared in her victory speech early Wednesday morning.

Tlaib is serious about structural change. She's a champion when it comes to resistance to Trump and Trumpism. But she is determined to move beyond resistance and usher in a new era of progressive governance -- one in which civil-rights protections are not merely defended. They will be enhanced. When she takes office, Tlaib says, she will "propose legislation to drastically expand U.S. civil rights protections to cover discriminatory impacts, in addition to discriminatory intent."

Her long-term goal is to achieve "a sweeping change for America that would change the landscape for millions of citizens."

This is the big vision that helped a speak-truth-to-power activist win one of the most intensely contested primaries in the country this summer.

Tlaib's now the Democratic nominee in a Democratic district -- the one formerly represented by John Conyers -- and she is all but certain to take a seat as a member of the US House next January. Don't expect this lawyer, activist, and former state legislator to serve as a backbencher. The woman who was once thrown out of a Trump rally for demanding that the billionaire candidate "read the Constitution" is going to shake up the political status quo. For one thing, she would be the first Muslim-American woman ever elected to Congress. For another thing, as a Palestinian American, and the child of immigrants, she will bring bold ideas and a vital sense of urgency to Capitol Hill at a time when, as Tlaib suggests, it is necessary to "resist Trump's attacks on our communities."

Related Topic(s): Activist; Congress; Equal; Muslim; Palestinian; Rashida Tlaib, Add Tags
Add to My Group(s)
Go To Commenting
The views expressed herein are the sole responsibility of the author and do not necessarily reflect those of this website or its editors.