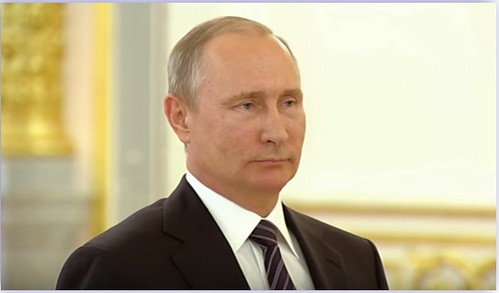 Vladimir Putin has decided how Russia is going to pay for the corona-virus.

He's going to tax the rich.

It's a remedy that most Americans would support if they were given the choice, but they weren't asked. Instead, Congress passed a $2 trillion stimulus package for which the American taxpayer will be held entirely responsible. Even worse, the new legislation contains a $500 billion allocation (another corporate giveaway) that the Federal Reserve will use as a capital base for borrowing $4.5 trillion. That massive sum of money will be used to buy toxic bonds in the corporate bond market. Just as Mortgage-Backed Securities (MBS) were used to fleece millions of investors out of their hard-earned savings in the run-up to the 2008 Financial Crisis, so too, "toxic" corporate bonds were the weapon of choice that was used to pilfer trillions of dollars from investors in the run-up to today's crisis. (Same scam, different instrument) The virus was merely the proximate cause that tipped the sector into meltdown. The problem had been festering for years and everyone in the financial community (Including the Fed, the BIS and the IMF) knew that it was only a matter of time before the market would blow sky-high. Which it did.

What every American needs to know is that our crooked bought-and-paid-for Congress just passed a bill that transfers the credit risk for $4.5 trillion of corporate sludge onto the National Debt. A bailout of this magnitude could impact the nation's credit rating (Fitch has already issued a warning), send interest rates to the moon, dampen economic activity for years to come, and pave the way for a long and painful slump. The much ballyhooed $1,200 checks for unemployed workers are merely a tactical diversion that's being used to conceal the giant ripoff that is taking place right under our noses.

In contrast, Putin has settled on a more rational and compassionate plan. He's going to launch a relief program that actually focuses on the people who need it the most. Then, he's going to cover the costs by taxing the people who are most capable of shouldering the burden. His intention is not to "soak the rich" or to redistribute wealth. He simply wants to find the most equitable way to share the costs for this completely unexpected crisis. In short, Putin was presented with two very bad options:

1- Let the Russian people huddle in their homes ("shelter in place") until the food runs out and the bills pile up to the ceiling.

2-Or tap into a temporary source of revenue that will help the country get through the hard times.

He wisely chose the latter option not because he's a fiery leftist who hates the "free market", but because he realizes that in a time of national crisis, the people who are more able to pay, should pay. It's a question of fairness.

And who are the people who will benefit from Putin's plan? Well, he named them in a speech he delivered to the nation just last week. Here's a clip:

"We also need to take additional steps, primarily to ensure the social protection of our people, their incomes and jobs, as well as support for small and medium-sized businesses, which employ millions of people".

First, all social protection benefits that our citizens are entitled to, should be renewed automatically over the next six months" if a family is entitled to subsidized housing and utility payments, they will not need to regularly confirm their per capita income to continue receiving this state support"all payments to war veterans and home-front workers timed to the 75th anniversary of the Great Victory, 75,000 and 50,000 rubles, respectively, should be made before the May holidays"

Second, it is essential to support families with children""..Third, we need to support those on sick leave and people who have lost their jobs." (Putin's Address to the Nation)

See? No big payouts to failing corporations, no welfare checks for Wall Street, and no tax breaks for fatcat bankers and their crooked friends. Just money for the people who desperately need it: Families with children, veterans, home-front workers, the sick, the unemployed, and the homeless. Simple and fair.

The strategy is aimed at everyone who is impacted by the virus, not just the people who filed taxes last year like the Trump Plan, but anyone who needs public assistance. At the same time, financial support will be provided for small and medium-sized businesses, incomes will be protected, jobs will be guaranteed. and mortgage payments will be suspended. It's not a perfect plan, but it's fairly comprehensive and targets the people that are most vulnerable. It also underscores the primary responsibility of government during times of crisis, that is, to ensure the health, safety and security of its people. That is Job 1.

Related Topic(s): Corona Virus Coronavirus Covid-19; Vladimir Putin, Add Tags
Add to My Group(s)
Go To Commenting
The views expressed herein are the sole responsibility of the author and do not necessarily reflect those of this website or its editors.