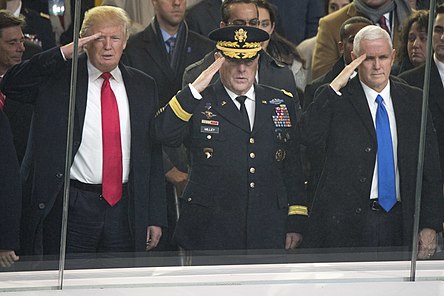 Trump's Eyes Are on Something Else
(Image by Navy Petty Officer Second Class Dominic A. Pineiro)   Details   DMCA

Today, The Guardian broke the most disturbing news to emerge in a continuum of such news.

According to The Guardian, in January of 2016, Russian President Vladimir Putin ordered his security services to "use all force" to get Republican candidate Donald J. Trump elected President of the US in 2016.

Putin has repeatedly denied accusations of interfering in western democracy. The documents seem to contradict this claim. They suggest the president, his spy officers and senior ministers were all intimately involved in one of the most important and audacious espionage operations of the 21st century: a plot to help put the "mentally unstable" Trump in the White House, declares The Guardian..

The documents leaked from the Kremlin are genuine, according to a variety of independent experts on Kremlin communications and security procedures. The Guardian does not say exactly how it came in possession of the papers-- i.e., who leaked them.

What is most disturbing about these papers, and the decisions made at the top level of Russian Federation government in this meeting, is the apparent conclusion that it is a positive step to not only allow, but to aid, a mentally unstable (to say nothing of blindingly ignorant of American history, and utterly opposed to traditional American political traditions and procedures) candidate to become POTUS.

Apparently the decision was reached at this meeting that the "turmoil" that the election, and Presidency, of Trump would cause among the US people, and the skeletons in Donald Trump's closet which Russia possessed, would weaken the US, and allow Russia to undertake "bold" foreign policy initiatives.

There was no talk among the heads of the Russian security apparatuses about whether a mentally unstable US President might, in some crucial moment in the progression of his inferiority complex, authorize the use of nuclear weapons. Apparently they must have concluded that Trump's degree of mental instability was not dangerous enough to endanger Russia, but severe enough to damage his own country.

And besides that, they concluded that Russia's palpable new influence on American political decisions would also induce America's allies not to go along with, or weaken, sanctions imposed by the US.

How dangerous was Trump considered by those who might, in extremis, have had to disobey his orders?

According to KVIA.com, excerpts of an upcoming book, I Alone Can Fix It, from Pulitzer Prize-winning Washington Post reporters Carol Leonnig and Philip Rucker, show that the top U.S. military officer, Chairman of the Joint Chiefs of Staff, Army Gen. Mark Milley, was so shaken that then-President Donald Trump and his allies might attempt a coup or take other dangerous or illegal measures after the November election that Milley and other top officials informally planned for different ways to stop Trump.

The excerpts, published by CNN, describe how Milley and the other Joint Chiefs discussed a plan to resign, one-by-one, rather than carry out orders from Trump that they considered to be illegal, dangerous or ill-advised.

"This is a Reichstag moment," Milley told aides, according to the book. "The gospel of the Fuhrer."

Ahead of a November pro-Trump "Million MAGA March" to protest the election results, Milley told aides he feared it "could be the modern American equivalent of 'brownshirts in the streets,'" referring to the pro-Nazi militia that fueled Hitler's rise to power.

How would Russia have reacted if there were a successful coup or if Trump tried to fire nukes? Well, first of all, we must be reassured by what Milley told Speaker of the House, Nancy Pelosi, when the two conferred after the January 6 insurrection.

Related Topic(s): Russia Using Trump; Us Foreign Policy And Russian Influence; Vladimir Putin, Add Tags
Add to My Group(s)
Go To Commenting
The views expressed herein are the sole responsibility of the author and do not necessarily reflect those of this website or its editors.