President Trump, the "Great Dealmaker," is not that much on making deals in the real world, rather than in the world of "reality" TV and his own mind. See his multitude of failures: the Atlantic City casinos, Trump wine, the Trump airline, the failed Moscow Trump Tower, his failure to negotiate to prevent the removal of his name from a variety of properties around the world, even the tough time son-in-law (and special assistant in charge of everything) Jared Kushner has had in keeping afloat the very bad deal he made in buying [the appropriately numbered] 666 Fifth Ave. in New York City. 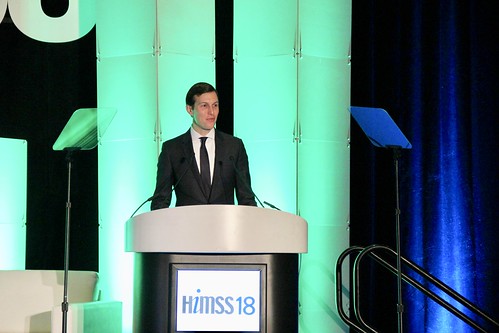 Why Jared, you might ask? What? You want yet another Trump caricature here?
(Image by danxoneil)   Details   DMCA

And then, Trump is really such a poor deal-maker that he revels in using those powers of the Presidency he can deploy without making deals with anyone else, even in his own Administration, much less the Congress. Such as: tariffs, trade-wars-via-tariffs, immigration policy, recess- and acting- appointments to high positions in his cabinet as well as mid-level positions throughout the government ("who wants to work for Trump?" is a widely-heard phrase), setting up "summits," and "pulling the troops out of Syria." Some observers are praising the move, as a step in beginning the "pull-back from U.S. imperialism all around the world" (Actually the latter is not even a complete "pull-out," for the U.S. Air Force is apparently continuing to undertake air-strikes and the President has talked about "commando raids across the border from Iraq, if necessary.")

More importantly, Trump has never shown the ability to engage in any kind of strategic thinking, even the imperialist sort. (The website almost exploded when I put the terms "Trump" and "strategic thinking" in the same sentence.) Most likely this is one of his many decisions designed to distract from, for example: his increasing legal difficulties of a variety of sorts, his Southern Border policy which is increasingly focusing on Trumpcentration camps, the government shutdown for which he took responsibility (before he tried to change that one), the roiled stock markets. Increasingly, he is making decisions that make him feel good just because he can actually do something, whatever it is.

Furthermore, Trump can hardly be defined as a "peace President," as some would do, as if he had ordered the withdrawal from Syria on the basis of principle, for peace. After all, this is the President who: is further building up the already hugely bloated US armed forces; is preparing for, itching for, a confrontation with China in the South China Sea; has scrapped the Iran Deal which could theoretically at least lead to Iran re-starting their nuclear weapons program, while having his Sec. State talk openly of making war on Iran; has consistently undermined the only leader of a major European country which has ended its own nuclear weapons program (Germany); has been unable to come to any kind of arrangement with North Korea to, let's say, bring them into the Nuclear Non-Proliferation Treaty; has talked openly about invading Venezuela; is debating the scrapping of the intermediate range ballistic weapons treaty with Russia; and so-on-and-so-forth.

So, let's see. If Trump is not a "principled peace President," who should --- according to some commentators ---- be supported on this one even if he is clearly a 21st Century Functional Fascist. And if he has clearly not connected the Syria withdrawal to an overall change of Middle East policy (certainly way beyond anything that Trump is intellectually capable of), what drove him to the decision? Possibly it's "fulfilling a campaign promise" even if it, in isolation, makes no sense. But there are bunches of campaign promises that he has not fulfilled, like "draining the swamp" and "getting the best people to come to work" for him, or (of great currency currently) "building THE wall and having Mexico pay for it". So it's not likely to be that one. 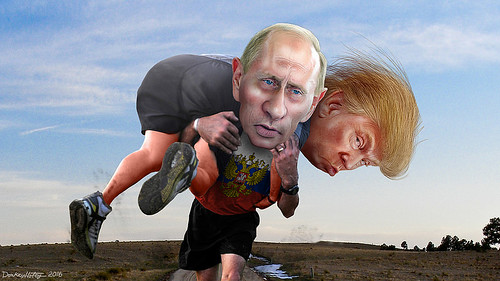 Rather, it seems to me at this time, that a good guess is that Putin has finally decided to call one or two of the trump cards he has on Trump. The US has been doing stuff that is contrary to Putin's interest, particularly in the area of sanctions, often beyond Trump's control. And so, it is logical to think that Putin has demanded that Trump do something for Russia, now, otherwise the mounds of dirt that Putin has on him will begin to dribble out pf that pile. (And plus, the quietude on the Kerch Strait incident is most noticeable.)

And then we come to other major beneficiary of the pull-out (aside of course the Assad government and Iran), and that is Turkey. It is the U.S. which has essentially been protecting the Kurdish sector of Syria, in return for major Kurdish military action against ISIS. Neither the Turks, the Syrians, nor the Iranians have much truck with the Kurds. The Turks in particular would just like to get rid of them, especially the ones on Turkish soil (and wouldn't mind getting rid of those in neighboring Syria as well). And so it could very well be that the deal with the Turks is that Erdogan has promised to drop the Khashoggi stuff (as well as continuing to let the U.S. use the Incirlik airbase), and stop making a continuing fuss about the anti-Erdogan cleric Fethullah Gulen in the U.S. (yes, that's the same one who Mike "Lock Her Up" Flynn, without registering as a foreign agent, was angling to get sent back to Turkey, during the Presidential campaign).

If I'm right about this, in return for dropping both the Khashoggi (very embarrassing) and Gulen stuff, Erdogan would just want Trump to allow him, once the U.S. troops are withdrawn, to go in and massacre tens of thousands of Kurds. (The Turks happen to have significant historical experience in this kind of thing: see "The 40 Days of Musa Dagh." So it shouldn't be too difficult for them to pull it off.) Of course, as implied by certain supporters of the Trump Pull-out, it will make all those slaughtered people feel so much better to know that it really serves them right for hooking up with the world's leading imperialist power to get protection for their lives, when they couldn't get it from any other power.

Of course, who knows what Erdogan may have on Trump. E.g.: "Leaders of one Turkey's major political parties in August called for the government to seize the Trump Towers Istanbul skyscraper complex, and four months later, Donald Trump acquiesced to a Turkish demand to pull troops out of Syria." Finally, why does playing the Trump Card in this kind of game always lead to a mess, and in this case a mess that could be fatal to tens of thousands of people, plus creating another huge refugee crisis.

Support the Syrian pull-out move? Whether one "hates" him or not (and I surely don't --- what I do see clearly is the fascist in him, which has created a gigantic danger for the U.S., as well as the rest of the world --- emotion has nothing to do with it), it is a Trump decision, and I haven't seen a "good" one yet.