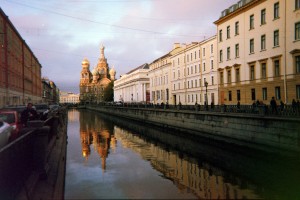 Since the collapse of the Soviet Union, much has been written about "the Russian idea." Subsumed under this term are the very issues - moral, religious, and national/cultural - that [Dmitrii] Merezhkoskii treated in the works we have discussed. In a replay of the fin de siecle, Russians are again discussing how to make Christianity relevant to life in this world, Christian attitudes toward sex, Christian art, and the proper relation of church and state. They are trying to define a postcommunist Russian identity and to find the organizing principles by which they can reconstruct their world.

Russian Thought After Communism: The Recovery of a Philosophical Heritageis a book of essays by various contributors (edited by James P. Scanlan), published in 1994, elaborating on the work and thought of several Russian philosophers of the pre-Soviet era and how this heritage is influencing the post-Soviet era. Rosenthal's essay is about Dmitrii Merezhkovskii, who was a philosopher, playright, historical novelist and literary critic. He was active in the years just prior to and during Russia's revolutions of the early 20th century and focused much of his attention on the thought and work of the great Russian literary writers, namely Fyodor Dostoevsky and Leo Tolstoy. However, the focus over the years would center on Tolstoy to the point of near obsession, representing a complex - often contradictory - assessment of whether Tolstoy was a prophetic saint or a nihilistic hypocrite.

Around 1900, he published a study and contrast of the two preeminent novelists, Tolstoi and Dostoyevskii, LIfe and Art. A Study. With a deep interest in morality and Christianity, Merezhkovskii believed that literature - which, at its best, can serve as a vehicle for exploring important moral and philosophical issues in all of their complexity and nuance - should be a guiding force in the inevitable choice between good and evil. He was correct that Russians were about to face a momentous choice of paths to follow in the form of reform versus communist revolution. Merezhkovskii believed that communism, particularly the Bolshevik manifestation, was the equivalent of evil, largely due to its atheism and repression of religion and spirituality.

Merezhkovskii's apocalyptic Christianity was said to be a reaction to Nietzsche's "God is dead" nihilism with Jesus serving in Merezhkovskii's mind as the countervailing "Superman" who would return to earth offering a "Third Testament" that would reconcile paganism with Christianity and the spiritual with the earthly life.

In this study, Merezhkovskii held Dostoyevsky in high regard and "deconstructed" Tolstoy as having a "slave morality" and conducted a lengthy contrast between Tolstoy and the poet Pushkin, whom Merezhkovksii lionized, stating that where Pushkin represented harmony, successful integration of artist and intellectual, and reconciliation of the cultured man and the proud Russian, Tolstoy represented "rupture," emotional and spiritual dearth, and advocacy of an "abstract cosmopolitanism" that rejected Russian patriotism.

He criticized Tolstoy's characters for being passive contemplators and victims rather than heroes with a sense of agency. He also expressed disdain for what he saw as Tolstoy's "rational Christianity" lacking any sense of the mystical, mysterious or experiential, and attributed these shortcomings to a profound fear of death on Tolstoy's part. This fear, Merezhkovskii claimed, prompted him to view man's relationship to God as "the criminal sentenced to death, and God is the executioner." (p. 128)

Merezhkovskii also felt Tolstoy did not have a proper appreciation of the cause and effect patterns of history, stating "his Christianity did not grow from Russian or west European soil but fell from the heavens already prepared." (p. 129)

Merezhkovskii's views of Tolstoy would evolve over the years with Tolstoy's excommunication by the Holy Synod of the Orthodox Church in 1901. By 1905, Merezhkovskii's religious and political views had changed in a way that made them compatible with a re-examination of Tolstoy. Advocating "religious revolution," Merezhkovskii now recast Tolstoy as "a prophet of Christian anarchism" but criticized his rejection of the 1905 revolution (which decreased the Czar's rule from that of an autocrat, at least on paper), and Dostoyevsky was now "a prophet of the Russian Revolution" but open to criticism for his theocracy. (p. 131)

As disillusionment with the 1905 revolution in the areas of society and culture set in, Merezhkovskii saw Tolstoy's doctrinaire moralism no longer with disdain but with qualified acceptance.

A common theme in Russian philosophy of the 19th and early 20th century involved trying to reconcile difference forces and influences. To some extent, these are universal concerns for most cultures at various points in their development, but for Russia, it is perhaps even more so due to the nation's particular geography, climate and history. The country is vast, situated between the West (represented by Europe) and the East (represented by Asia), multiethnic and multiconfessional, with a history filled with foreign invasions, natural disasters, and social upheaval that creates a yearning for security and stability.

After 70 years of relative cultural and philosophical stagnation under the Soviet system, Russians find they are grappling with many of the same issues that their pre-Soviet thinkers did with respect to religion, culture and the nature of the state. Consequently, they have been getting reacquainted with these thinkers over the past 25 years. Much has been made among the usual western pundits who have little depth of understanding when it comes to Russia, yet sally forth onto the pages of western newspapers and magazines anyway, about Vladimir Putin's assignment of the works of 3 pre-Soviet Russian philosophers to be read by all the regional governors during the 2014 Winter holiday. Those 3 philosophers were Vladimir Solovyev, Nikolai Berdyaev, and Ivan Ilyin. This book includes essays dealing with all 3 of those philosophers and, due to their contemporary relevance to Russian political thought, the remainder of this review will focus on them.

Solovyev has been categorized as one of the early Slavophiles, along with Ivan Kirveevskii, Alexei Khomiakov, and Nicolai Fedorov who were considered trailblazers of Russian philosophy in general. The basic elements that underpinned early Slavophile philosophy included being pioneers of a philosophy that was unique and original to Russia, fitting with its culture and experience.

Pre-Slavophile Russian philosophers are typically ignored or dismissed by the Slavophiles, according to Scanlan, as being too heavily influenced by external intellectual forces.

Related Topic(s): Christianity; Culture; Leo Tolstoy; Philosophy; Russia; Russian History; Russian Orthodoxy; Vladimir Putin, Add Tags
Add to My Group(s)
Go To Commenting
The views expressed herein are the sole responsibility of the author and do not necessarily reflect those of this website or its editors.