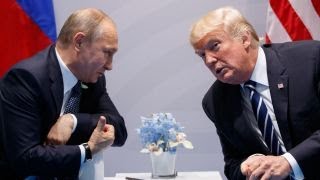 How convenient! Just as President Donald Trump is about to hold an historic meeting with Russian leader Vladimir Putin, we get a reminder of a "dastardly Kremlin poison plot."

Trump is due to meet with Putin in Helsinki on July 16 in a full summit, keenly anticipated as perhaps signaling a breakthrough for improved East-West relations. Some observers are even referring to the Helsinki conference as the political event of the year.

What is clear is that Trump's political enemies at home and abroad are acutely vexed by the possibility that the Helsinki meeting with Putin may succeed in repairing badly frayed relations between Washington and Moscow. Surprising as it may seem, there are huge vested interests in maintaining confrontation between the two powers.

The British political establishment, according to media reports, are particularly apprehensive that Trump and Putin might find a way to normalize bilateral relations. That would undermine the so-called, and much overblown, "special relationship" between the US and Britain.

European NATO acolytes who are meeting next week for an annual NATO summit are also unnerved by the prospect of American-Russian rapprochement. Think about the lucrative weapons contracts that will be jeopardized, as well as plush sinecures for NATO-aligned flunkies and think-tanks.

It is this geopolitical context and self-serving powerful interests which could likely explain the strange rebound of the "Skripal poison affair."

This week British police and dutiful news media reported that an ordinary male and female couple were found poisoned with "novichok" -- the alleged deadly nerve agent which Britain's authorities earlier accused Russia of using to assassinate a former Russian spy and his daughter.

This story is so impossibly tall, it is bound to fall under its own distended weight of incredibility. That is, if we were to consider the story rationally. But being rational and critical is not what the British news media are generally about. Instead, they are about pushing state propaganda and sensationalism, and in particular the kind of propaganda to smear Russia with.

Exactly four months after British double-agent Sergei Skripal and his adult daughter Yulia were apparently struck down with a deadly toxin in the southern English town of Salisbury, now we are told that a male and female couple, in their mid-40s, have also been poisoned with the same substance -- reportedly "novichok."

The latest alleged victims live in the nearby town of Amesbury -- some 12 kilometers from Salisbury. British police are reported as saying that they don't know how the couple came into contact with the alleged nerve agent. But it is speculated they visited Salisbury over the weekend and the public park were the Skripals were said to have been poisoned back on March 4.

It is further speculated in the British media that the Amesbury pair may have unwittingly touched some discarded material which was used to deliver the novichok chemical allegedly used to target the Skripals.

Such a scenario defies belief. The statistical odds of such an encounter taking place are infinitesimal beyond words and numbers.

If novichok nerve agent had been used against the Skripals and traces were left at the Salisbury scene, why has no-one else suffered exposure -- until now? Especially after British military teams spent weeks supposedly decontaminating the entire area.

Related Topic(s): Novichok; Propaganda; Skripal; Us-russia Summit; Vladimir Putin, Add Tags
Add to My Group(s)
Go To Commenting
The views expressed herein are the sole responsibility of the author and do not necessarily reflect those of this website or its editors.