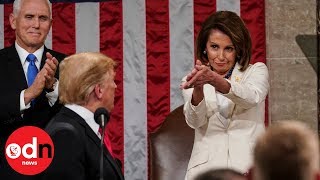 To take impeachment of Donald Trump in effect off the table, House Speaker Nancy Pelosi has taken possession of the issue and its consequences. It's a high-risk move with little upside and a mine field for a downside.

Pelosi leans on two primary arguments to justify her position, "he's not worth it" and "the Senate will never convict."

The "he's not worth it" argument is preposterous on its face, having nothing to do with anything and no basis whatsoever in law. Neither the Constitution nor any federal statute makes any reference to the speaker of the House deeming the President being "worth it" as a criterion for impeachment. It's a recklessly capricious stance.

While technically true, the "Senate will never convict" argument conveniently misses the point so badly that its only practical use is as a red herring. Did the likelihood of success in the Senate stop House Democrats from drafting and passing H.R.1 - For the People Act of 2019? HR-1 has no apparent chance of being passed by the Republican-controlled Senate, but the Democrats pushed it through anyway.

It bears noting that Speaker Pelosi left open the possibility that impeachment might be an option with bipartisan support. That begs the question, why vote for the Democrats if they kick the decision back over to the Republicans?

The President of the United States is a subject of an ongoing counter-terrorism investigation. When is it okay to talk about impeachment as a viable option?

For starters, yes, we do have collusion with the Russians to gain control of the White House. When Donald Trump stood at the podium on the 2016 campaign trail quoting the Podesta emails and praising Wikileaks for disseminating them, he knew full well they were stolen, and he knew who had stolen them because he had been informed by federal law enforcement. That's all blatant collusion in plain sight.

On to High Crimes: Continuing on the theme of illegal acts to achieve power, we move into campaign finance law violations in the Stormy Daniels and Karen McDougal payoff schemes. All now public record.

Obstruction of Justice: Nixon was impeached and forced from office on a core allegation of obstruction of justice. Again, in the public record there is enough evidence of Donald Trump obstructing or attempting to obstruct the various investigations of his conduct to indict and convict him 10 times over.

Emoluments, personal enrichment violations: The Trump hotels are fully functional, up-and-running bribery and money laundering operations. If you want to pay off Donald Trump for special consideration, check into one of his hotels and spend a lot of money. All in plain sight, of course.

What makes Speaker Pelosi's position on impeachment so pervasively detrimental is that she is saying, in effect, "We don't want to know ... because even if we do know we won't do anything anyway." Where is the incentive to make public the evidence of illegal conduct on the part of Donald Trump? The argument can be made that such evidence would be a political liability to a Democratic Party committed to avoiding impeachment.

This position by the speaker of the House of Representatives makes a mockery of everything the Democrats and federal law enforcement have been saying for the past two years. What we have been hearing all this time is that Donald Trump achieved power with the assistance of a hostile foreign power. Nothing could be more serious or pose a greater legal and political threat to the country. Now having regained power, the Speaker doesn't want to lift a finger. It's stunning.

Related Topic(s): Collusion; Democrats; Evidence; Impeachment; Pelosi-Nancy; Public; Republican, Add Tags
Add to My Group(s)
Go To Commenting
The views expressed herein are the sole responsibility of the author and do not necessarily reflect those of this website or its editors.