Part III of Hurricane Florence Hits the Carolinas: A Natural Occurrence -- An Unnatural and UNNECESSARY Disaster

Category-4 Hurricane Michael battered the coast of the Florida Panhandle October 10, before moving through Georgia, the Carolinas, and on to Virginia. Michael, which came less than a month after Hurricane Florence, was reportedly the most powerful storm ever to hit the Panhandle. It left death and massive destruction in its wake, including nearly obliterating the entire town of Mexico Beach where it made landfall.

Meanwhile, on October 8, two days before Michael hit Florida, a news report by the United Nations' leading body on climate science, the United Nation's Intergovernmental Panel on Climate Change (IPCC), warned that the climate crisis is not a far-off problem--it's happening right now, and it's accelerating more quickly and having more devastating impacts much sooner than previously understood. The report called for radical, "unprecedented" transformations starting immediately to reduce greenhouse-gas emissions from fossil fuels to prevent a global catastrophe. A co-chair of the group of 91 scientists from 40 different countries who wrote the report calls the next few years "probably the most important in our history."1

This series on Hurricane Florence examines how the capitalist-imperialist system of today fuels such hurricanes and worsens the death and destruction, and we start to grapple with why and how it would be radically different in a genuinely socialist society. Part 1 discussed how this "monster storm" was fueled by a monstrous system. Part 2 discussed how Hurricane Florence hit the poor, the oppressed, and immigrants the hardest.

A 325-mile-long string of narrow sand islands--barrier islands--form North Carolina's outer coast. These islands and their wetlands are breathtakingly beautiful, yet also extremely vulnerable to rising seas and devastating storms--as are many islands and coastal cities around the world, some home to millions of people. 2

Over decades, North Carolina has built up its precious, fragile barrier islands in ways that accelerate environmental degradation, make them more vulnerable to storms and put ever more people and animal and sea life in harm's way. 3

Why? Because it's been enormously profitable to develop its coasts as a tourist destination, with homes, vacation homes and rentals, hotels and more. 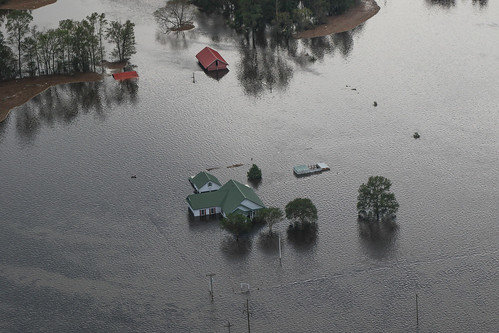 North Carolina's outer islands are facing some of the world's highest rates of sea-level rise. Yet their profitable development is so woven into the economic and social fabric of the Carolinas that North Carolina law forbids state and local agencies from using a 2012 North Carolina Coastal Resources Commission (CRC) report as a guide to coastal development. This report had warned that sea levels would rise by 39 inches--over three feet!--by 2100. (The National Oceanic and Atmospheric Administration projects the oceans will rise by more than six feet, enough to wash over some barrier islands at every high tide. 4) The legislature insisted instead that decisions be guided by unscientific, outdated "business-friendly" estimates that vastly understate this danger. The Democratic governor could have blocked the bill, but did nothing.

This year, South Carolina did likewise. Its legislature "changed the preamble to a 30-year-old law governing beachfront development," the New York Times reports, "striking out a state policy of 'retreat' from the shoreline in the face of erosion and replacing it with a policy of 'preservation' of the beaches." In short, keep building. 5

Federal government recovery policies, including the National Flood Insurance Program, are also shaped by capitalism and its short-term, profit-driven horizons. In the wake of these monster storms they are encouraging (paying) people to rebuild in place rather than relocate to more environmentally safe and more sustainable areas, in order to maintain housing prices, and profitable developments and tourist industries. 6

An analysis in the Pacific Standard found that federal recovery funding along the Carolina coast overwhelmingly favored owners of high-priced properties situated right along the beaches (and therefore more environmentally damaging and vulnerable), that rebuilding projects undertaken by the Army Corps of Engineers were explicitly shaped by profit-in-command criteria, and that all this reinforced white supremacy:

A ProPublica analysis of 16 North Carolina communities directly behind beaches that have received federal funds shows they're 94 percent white on average; a quarter of owner-occupied housing in these areas is worth more than $500,000 (compared with 7 percent in North Carolina as a whole)....

The Corps, tasked with managing flood risk across America, takes on engineering projects like building levees and renourishing beaches ostensibly because they prevent property damage from future disasters and lock valuable beaches in place. The Corps prioritizes projects that would prevent the most amount of damage per dollar spent. This tends to favor beach building in high-income communities full of pricey properties. The Corps generally funds projects only when the expected benefit is 2.5 times as high as the project's cost. Poor communities can't meet those criteria....

Related Topic(s): Climate; Science, Add Tags
Add to My Group(s)
Go To Commenting
The views expressed herein are the sole responsibility of the author and do not necessarily reflect those of this website or its editors.

STAY IN THE KNOW
If you've enjoyed this, sign up for our daily or weekly newsletter to get lots of great progressive content.
Series: "Hurricane Florence Hits the Carolinas: A Natural Occurrence—An Unnatural and UNNECESSARY Disaster"