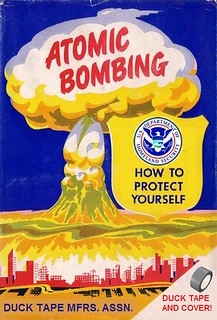 The possibility of nuclear war has become frighteningly real and we don't even know it because mainstream media is intentionally remiss. A major unreported story occurred recently, which illustrates the immediacy of an impending nuclear confrontation. Former Russian leader, and one time US media darling Mikhail Gorbachev, spoke somberly about the increasing crises between Russia and the US, saying: "We won't survive the coming years if someone loses their nerve in this overheated situation. This is not something I'm saying thoughtlessly. I am extremely concerned." That is a very stark and frightening comment from one who is in the know. Gorbachev was referring to the increasing rhetoric and provocative militaristic acts by the US on Russia's doorstep. Once again corporate media has been intentionally remiss in not fairly reporting events occurring in that part of the world, so the American public may not see the imminence of an impending nuclear war.

Neocons, using their corporate media serfs, have been hard at work trying to create a wedge that would isolate Russia from Europe, and have used a variety of methods to paint Russia as an aggressor nation, when in fact it is the US, who by its many provocative militaristic acts has endangered the entire world. Included in the provocations by the US government are: expanding NATO to include all the neighboring countries of Russia despite having agreed not to do so, playing war games within one mile of the Russian border, spending 5 billion dollars generating unrest in the Ukraine, and then assisting in a coup of a democratically elected leader of the Ukraine and supporting a new US puppet, sending 5 nuclear capable bombers to Europe including two B-2 bombers, the most sophisticated nuclear capable in our arsenal, and finally, placing military weapons in the Baltic States right across from Russia's border.

One must wonder if history is about to replay itself. Fifty years ago the US and Russia were on the brink of a nuclear holocaust when the US revealed Russia had installed nuclear armed missiles in Cuba. Few Americans realize why Russia installed those missiles, because, as usual, corporate media merely acted as the mouthpiece for the US government, and never really informed the US public, just as they did with the WMD lies that led to the invasion of Iraq and the death of one million people.

How many Americans know that Cuba invited the Russians to send in the missiles because Cuba was rightly convinced that the US was about to invade and overthrow the Castro government? An invasion had already been attempted in the failed Bay of Pigs debacle of 1961, and in an effort to protect herself from yet another US invasion, the tiny nation of Cuba sought Russian help. Few Americans realize the US had installed nuclear armed missiles in both Italy and Turkey, which, needless to say, made Russia extremely nervous. Russia retaliated by secretly sending missiles into Cuba in an attempt to protect Cuba from a US invasion, and to deter the US nuclear missile threat aimed at Russia from Turkey and Italy. Yet another well-kept secret is that all of Kennedy's advisors advocated invading Cuba to get rid of Russian missiles, which of course would have guaranteed a nuclear exchange. It was Khrushchev who sent a secret message to Kennedy with a proposal guaranteeing the removal of missiles from Cuba, as long as the US removed its missiles from Italy and Turkey, and also guaranteeing not to invade Cuba. This compromise by Khrushchev was accepted by Kennedy, despite his group of "intellectual" advisors insisting the US invasion go forward. The media portrayed this as a victory for Kennedy and the US, and with the Russians backing down and a nuclear war averted. Certainly Kennedy deserves credit for going against his "intellectuals", but Khrushchev deserves credit for submitting a compromise that averted nuclear war.

This historical lesson brings us to the present. Now the situation is completely reversed, with the US installing missiles, weaponry, and personnel, along the Russian border, and Russia feeling threatened as we did in 1962 with their nuclear armed missiles 90 miles from the US. At some point the Russians will stand and fight, but neocon warmongers in the US seem not to be bothered by the prospect of a nuclear war between the two nations. Suffice it to say to the US public, nuclear armed Russia is not like Grenada, Panama, Libya, Yemen, or Iraq. This folks, would be the "Big One", so it might be prudent for readers to be more aware of the current events by forsaking mainstream media and using alternative sources, then do something, before we are all either glowing, dead, or both.

Related Topic(s): Nuclear Attack; Nuclear_insanity; Russia; Ukraine; War With Russia; Warmongers, Add Tags
Add to My Group(s)
Go To Commenting
The views expressed herein are the sole responsibility of the author and do not necessarily reflect those of this website or its editors.