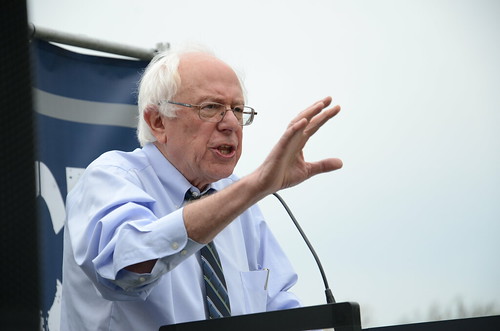 Bernie Sanders has played all his cards and has nothing to show except for a frustrated generation of populists trying to figure out what they should do. Sanders argued he would fight the Democratic bureaucracy at the convention, but his fight is already over. Last week the Democrats held their Platform Committee meeting in DC, and while Sanders had nominated five great populists and progressives, they were steamrolled by the stacked delegates of the corporatists candidate Hillary Clinton. The results of the meeting received very little corporate media attention in a usual attempt to cover for Hillary Clinton. All of the Sanders' proposals were voted down by Clintonites, including: a ban on fracking, a proposal to oppose TPP, the $15 per hour minimum wage proposal, a call for single-payer health care, and a statement of opposition to the illegal Israeli occupation. All were defeated by the Clinton team of delegates. Despite Clinton's ambiguous rhetoric on the issues, her platform is much clearer, denying anything that smacks of progressive change. So we are at a crossroads. What cards does Sanders have left? None. So he is done. He capitulated by showing his hand and gave away his leverage by agreeing to support the eventual candidate, so he is now finished with nothing else to do.

The important question is, what do the Bernie followers do now? First, one would hope they have learned a very bitter lesson, that the duopoly is thoroughly corrupt and cannot be reformed. It is too far gone and controlled by the war party, financial interests, and the corporatists. They have a vice-grip like stranglehold over the party, and they will never surrender power. They hold all the cards. Some Sanders supporters may have figured this out on the campaign trail, with masses of people being deprived of a vote by election rules set up by the established leaders of the party. Sanders supporters should have seen they had no chance when Clinton started the race with an insurmountable lead in "super-delegates," before one popular vote was even cast. The Democratic deck was rigged from the git-go, and hopefully some Sanders' followers now see the ruse of giving voters the illusion of voting. The real decision was never to be made by voters, for they might select the wrong candidate. Party leaders stacked the deck so they would always have the ultimate say and let the people be dammed.

There is no realistic hope of reforming the Democratic party, so the only alternative, if the populist movement is to survive, is to bolt the party. An outside or third party is the only hope of reforming this nation. Sanders is correct in saying Wall Street, corporations, health care industries, and the military industrial complex, have total and complete control of both major parties. In actuality there is little philosophical difference between the two major parties.

Can a third party buck the tide and break the corruption of the other two? Yes, in this particular political environment it could easily win the election because no one is enamored with the choice of candidates put forth by the of the leadership of the two parties. Both Clinton and Trump have the highest unfavorable ratings in the history of US politics. People will vote for Clinton because they hate Trump, and people will vote for Trump because they hate Clinton. It is a bizarre election which clearly demonstrates just how out of touch the leadership of both parties are with the people. If these two candidates represent the best two people in this country to run for the president, then throw in the towel, for the country is doomed.

Meanwhile, beneath the radar, kept a secret by corporate media, are candidates such as Jill Stein. You might never get the chance to hear her, due to the corporate black out of her campaign, but if by chance you do, you might be astounded. She is bright, she is reasoned, she is rational, she is articulate, and she he is presidential. She is everything the two major candidates are not.

Jill Stein has reached out to Sanders and offered him the position of president on the Green Party ticket, with she as the VP, but so far Sanders has not taken the bait because it looks like he may be beholden to the Democratic party leadership. If Sanders is a true Progressive populist he only has one option left, and that is to join a third party. Joining with Jill Stein would could very well mean a third party victory, in light of the resentment of the masses towards both duopoly candidates. Sanders and Stein only need 34% to insure victory, and that should not be difficult as most voters are thirsting for an alternative that is sane, rational, reasoned and civil. Will Sanders prove himself to be a true populist progressive, or will he cave to the democratic leadership, fold up his hot air filled progressive tent and go home?

Related Topic(s): Democrats; Duopoly; Election; Fracking; Health Care Universal - Single Payer; Progressive Central; Progressive Coalition; Progressive Liberal Left; Progressives; Progressives Relationship With Democrats, Add Tags
Add to My Group(s)
Go To Commenting
The views expressed herein are the sole responsibility of the author and do not necessarily reflect those of this website or its editors.