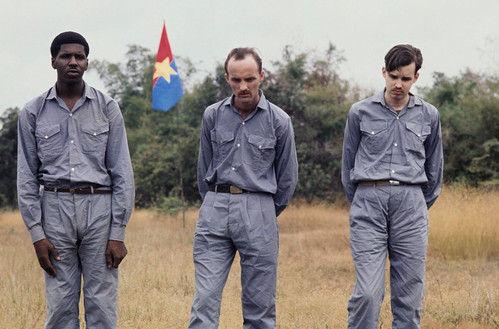 By now you've surely heard of how Glenn Greenwald, just before the last election, wrote an article outlining a lot of Joe Biden's seamier maneuvers regarding China and his son Hunter; couldn't get the article published in The Intercept, which he had founded and where he thought he had license to write what he wanted; and immediately resigned. The media as one wanted Trump out and would not publish anything anti-Biden.

The same thing happened in 2008, though it never received any attention. Mainstream publications all turned down Sidney Schanberg's expose' on then-candidate John McCain: his unsavory acts as a prisoner-of-war in Vietnam and his efforts to bury the evidence of American P.O.W.s left behind in Vietnam after the war. The article cut straight across the mainstream's fawning narrative of McCain the noble war hero. But the story of McCain and the evidence that many American prisoners were never returned from Vietnam, which Schanberg summarizes at the end of his article, is far more than a matter of media disregard. Doing research for my novella based on the abandoned-prisoners issue, I found that it concisely describes the incipient rot in American political culture.

The controversy about the left-behind P.O.W.s is decades old now, so here is a brief summary of it. The 1973 treaty that ended the Vietnam War declared in its Article 21 that America would pay war reparations to the Vietnamese. The amount, however, was left unstated. A letter from President Richard Nixon to North Vietnamese Prime Minister Pham Van Dong specified that $3.25 billion would be paid by America up front, with an additional $1 billion to $1.5 billion to be paid later, depending on different conditions. (If the U.S. had ended up paying, say, $3.75 billion, that would be $21.88 billion today, roughly double the budget of the U.S. Commerce Department.) The Vietnamese accepted this letter as a binding commitment; the Yankees had a different idea. As Richard Holbrooke told a Senate committee about his 1977 meeting with the Vietnamese, "It was then that I realized that it was more than a negotiating ploy, that they really believed it...The Vietnamese believed the Kissinger-Nixon letter to have standing...Our position was simple:...That letter has no standing....it is an outrageous document...which should never have been sent." Nixon's letter was, in true Kissingeresque fashion, kept secret, and when it came to light after Watergate, Congress immediately passed a law saying that America would not pay Vietnam a nickel.

As with the French after the Indochina War, the Vietnamese held back P.O.W.s as hostages until their opponents paid up. The French did and got their men back. The Americans, surely telling themselves that they were made of tougher fiber, refused to pay ransom.

Schanberg's article was dark stuff: McCain, son of an admiral, had received preferential treatment as a P.O.W., and even made a propaganda recording that was played over and over to prisoners. His guilt over this surely drove him, as senator, to head off the rumors about left-behind prisoners, broadly estimated at 300 to 1,200 men. (The North Vietnamese never published a list of prisoners.) His 1991 "McCain Bill" walled off all intelligence about remaining live P.O.W.s. And along with John Kerry, he stonewalled, ridiculed, and shouted down every line of investigation on the abandoned servicemen. Yet Schanberg's article, produced as McCain was running for president, went straight on the spike: the Times, the Journal, the Post, all the major news magazines and even Mother Jones turned it down.

The mainstream media's shunning of the P.O.W. issue probably explains why very few books have tried to penetrate the wall of ashamed silence around it. On Amazon.com, the non-fiction books I found could be counted on the fingers of one hand. And as to fiction, the leading light is the second chapter of the Rambo series: First Blood Part II. The 1985 film capitalized on years of sightings of bushy-bearded prisoners dressed in ragged fatigues - sightings largely by Vietnamese and Laotians then arriving in waves in America - and is worth examining for how, in true Hollywood fashion, it tries to tie off public interest in the subject.

The film is an empty, black-hat-white-hat shoot-'em-up bore that features Sylvester Stallone's chiseled body and nobody-loves-me scowl. Its only admirable aspect is that much of the action was shot in a roaring downpour: herculean concentration must have been required to turn in a decent acting job. The plot has John Rambo sent back to post-war Vietnam, where he once fought the war as a soldier, and told to seek out and photograph - just photograph - a military camp where American P.O.W.s are allegedly being held. If he finds any, a team will be sent in to liberate them. But Rambo hasn't built all those muscles just to click a shutter, and when he finds American prisoners, he grabs one in order to bring him back to the American base in Thailand. This angers Rambo's commanders, who instead of picking him up, abandon him to the Vietnamese.

Related Topic(s): Vietnam War, Add Tags
Add to My Group(s)
Go To Commenting
The views expressed herein are the sole responsibility of the author and do not necessarily reflect those of this website or its editors.