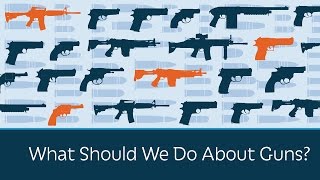 What Should We Do About Guns?
(Image by YouTube, Channel: PragerU)   Details   DMCA
>

On the one hand, because it's the 18th school shooting so far this year, the news that another psychologically damaged man shot 17 schoolchildren to death with an AR-15 semiautomatic rifle is not news. Put it on page 27 below the fold, maybe?

On the other hand, you have to be shocked because these are kids and who do we become if we stop being shocked? Congress and the president should put their heads together and act now.

On the one hand, the Second Amendment is an essential safeguard against government tyranny. While an authoritarian state (any state) will always have police and troops with better training and arms than its enemies at its disposal, owning a weapon will give many resistance fighters of the future the courage they need to fight back.

On the other hand, the population of Americans who live in rural areas was 95% when the Founding Fathers ratified the Constitution. Now it's 15%. Once a major source of food necessary for survival, hunting today is mere sport. Considering the daily carnage of gun violence, the Second Amendment may be as obsolete as the flintlock rifle. Perhaps we should repeal?

On the one hand, military-style weapons like the current mass shooters' gun of choice, the AR-15, were designed for one purpose: to kill people efficiently. Until 2008 they were banned. Why not renew the assault weapons ban?

On the other hand, people really do use them to hunt. Having been on the receiving end of more than my fair share of death threats, I'd rather defend my homestead with an AR-15 than a less efficient, less accurate gun. Sorry, liberals, but gun rights people have a point: ban AR-15s and the next step will be a push to ban other weapons. Slippery slopes are a real thing; look how the pro-life movement has rolled back abortion rights via incremental, reasonable-seeming moves like bans on late-term terminations.

On the one hand, there are 270 million guns in the United States -- almost one for every man, woman and child. Even if we banned guns, how would we force the gun genie back into its bottle of death? Send government goons to kick down every door in the country to search for them?

On the other hand, existing guns could be grandfathered into a ban on the manufacture and sale of new guns (including from one individual to another). Guns would get old. They'd rust. Those used for target practice would wear out. Trigger mechanisms are often the first to go. Like the fairly effective ban on ivory, the effect would become evident over time: a nation awash in weaponry would become less so with the passage of time.

On the one hand, states like Florida seem crazy for not requiring gun purchasers to register their weapons. Florida actually bans such regulations. Cars, boats, even bicycles and cats and dogs, must be registered. Why not devices that kill people?

On the other hand, gun ownership is different. It's a constitutional right. Automobile ownership, operating a boat and having a pet are privileges guaranteed by state and local laws. Mandatory gun registration would be no more constitutional than forcing media outlets to apply for a state license before publishing (they do this in other countries).

On the one hand, many if not most mass shooters are mentally ill. Wouldn't it make sense to prohibit sales of firearms and ammunition to people suffering from mental illness?

On the other hand, who gets to define what constitutes mental illness? Federal law bans sales to anyone who "has been adjudicated as a mental defective or has been committed to any mental institution." New York, where I live, goes further, banning sales of guns to one "who has stated whether he or she has ever suffered any mental illness." That's very broad: "Heathers" and "Stranger Things" actress Winona Ryder, singer Mariah Carey, artist Yoko Ono and actress Roseanne Barr were all institutionalized. But no one thinks they're going postal anytime soon -- frankly, I'd trust Winona with the nuclear codes more than Trump. The metric is also highly subjective. Gays were officially classified as mentally ill until 1987. Transgender people are still on the list.

On the one hand, people who knew him say they're not surprised that Florida shooter Nikolas Cruz went berserk. The signs were there all along: violent Internet posts, ties to white supremacists, erratic behavior like threatening people with a BB gun. People saw something; why didn't they say something?

On the other hand, this isn't "Minority Report." You can't jail someone for what they might do. People are entitled to their opinions, no matter what they are. If you jailed everyone who acts strange or right-wing or loopy, half the country would be locked up. And anyway, who trusts the police or the government to decide which half?

Related Topic(s): Control-freaks; Guns; Political Insanity; Violence, Add Tags
Add to My Group(s)
Go To Commenting
The views expressed herein are the sole responsibility of the author and do not necessarily reflect those of this website or its editors.