The New Year's "fiscal cliff" deal represents another Obama "victory." For whom? As pointed out in Holland's article below, the Bush tax cuts had already expired when this deal was done. This means that, after allowing the FICA tax cut to expire for all working people, Obama made a deal to give new, permanent tax cuts to the wealthy, and paved the way for Social Security and Medicare to be put on the chopping block.  As I've said a number of times before (here, here, here), "the next Obama administration, claiming to be standing on the high ground of principle, will be, and will be proud to be, the first administration to cut Social Security.  Guaranteed.  And they'll sell it as a 'save.' Obama and the Democratic Party really think it's the right thing to do."

Anyone who's waiting to see whether Obama and the Democrats will finally take a stand when the Republicans hold the country hostage to the debt ceiling is showing a truly delirious capacity to ignore what has been said, done, and established before their eyes repeatedly. Obama and the Democrats will make sure this gets done. With very few, if any, principled exceptions from the left, all Democrats who need to -- including Pelosi, Reid, and, yes, Bernie Sanders, all of whom voted for this mess --  will vote to save reform undermine Social Security and Medicare, because, well, they just have to.

Can it be said, with a straight face, that there is anything left of Democratic-party welfare-state American liberalism than an ever more vacuous nostalgia? 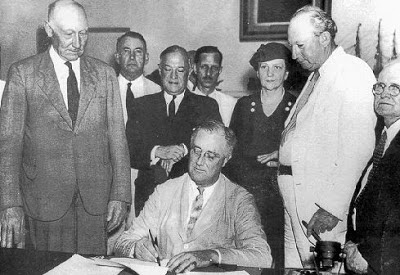 Some recent articles worth reading:

Right-Wingers Who Think They Got 'Rolled' by Obama In Cliff Deal Are Totally Crazy
Either they get everything they want, or they scream bloody murder.
By Joshua Holland
I thought that by this point, I was beyond the capacity to be shocked by the delusions held by the American Right. But my jaw dropped when I read that a number of high-profile conservatives are outraged  about the fiscal slope deal, and believe they have been "rolled" by Obama. The very notion is wildly delusional.... {Read on}

An Ugly, Ugly, Ugly Deal
by Robert Borosage
On New Year's Day, the Senate and House passed a "fiscal cliff" deal by respective votes of 89-8 and 257-167.  The deal has some good parts.  It lets the Bush tax cuts expire on the wealthy, raises the estate tax marginally and increases taxes on capital gains and dividends a bit.  Unemployment benefits are extended for a year.  Tax boosts for the low paid workers -- the child tax credit, expanded earned income credit, refundable tuition tax credits -- are extended, if only for five years.  Social Security, Medicare and Medicaid are not touched.

But no one should be fooled.  This is an ugly deal, with foul implications for the coming months.... {Read on}


Wall Street Pulls the Strings: Social Security Under Attack in February
Dave Lindorff
The president and the Democrats in House and Senate could have said there would be no deal on the artificial Fiscal Cliff that was created by Congress back in August 2011 unless Congressional Republicans agreed not to hold the nation hostage again this February over the issue of raising the national debt ceiling. Republicans were in a weak position, since if the "cliff" deadline were allowed to pass, the Bush tax cuts would have expired. They would have been put in the position of being unable to pass new legislation restoring tax cuts for the wealthy, while Democrats could have forced them to pass tax cuts for those in the middle and lower classes.

Instead of doing that, the president and his vice president ... offered a "compromise" that give tax breaks to the 1% of Americans who earn between $250,000 and $400,000 a year, protected up to $5 million in estate value from inheritance taxes, and left the GOP free to hold Congress and the Country hostage in February and March when Congress has to pass a new increase in the debt ceiling....

And with the government held hostage in February, and unable to borrow further without a rise in the debt ceiling, Democrats will have an excuse to go along with their demands, claiming that they had "no choice."... {Read on}


Middle class the big loser in "fiscal cliff" deal?
Erik Sherman
(MoneyWatch) The "fiscal cliff" clash in Washington may leave middle- and lower-income Americans paying more in taxes while preserving a range of tax breaks for various industries and businesses.

After Congress opted to let a "holiday" on Social Security taxes lapse, under the bill signed into law on Wednesday working Americans will see a 2 percent increase in taxes on their gross salaries or wages. Make $50,000? That's another $1,000 in taxes withheld every year. Someone making $15,000 would pay an additional $300. But because payroll taxes are capped for incomes greater than $113,700, people whose income exceeds that threshold pay $2,274 more a year.

It's a regressive tax: The higher the income, the smaller percentage the increase represents. For everyone, meanwhile, it's a net increase... [Read on]


New York Times Article Tells Big Lies on Impact of Fiscal Cliff Deal on Rich v. Ordinary Americans
....fiscal cliff fix is only a small reversion of the Bush-era big breaks to the rich. Dividends are still taxed at capital gains rates (they were taxed at ordinary income rates before); estate taxes are vastly lower than they were in the 1980s and 1990. And even on the Federal income tax front, this chart gives you an idea of how little the pact does to change the distribution of income across income groups, and actually leaves a big chunk of the affluent but not rich better off. From Richard Green: 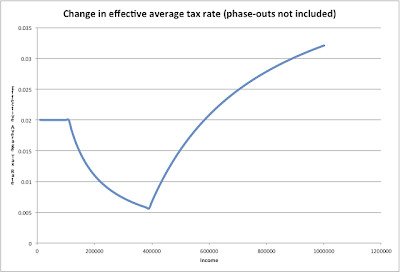 And, finally, from the Daily Mail:
Workers making $30,000 will take a bigger hit on their pay than those earning $500,000 under new fiscal deal
Hayley Peterson 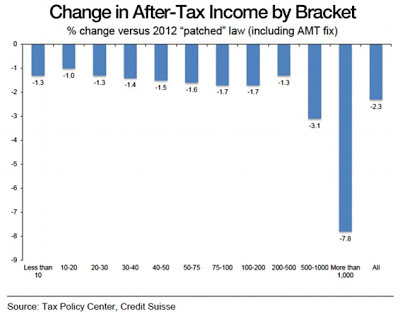