The DNC's Donna Brazile is right. In Trumped times, there is a special duty to "aggressively defend victims of discrimination." 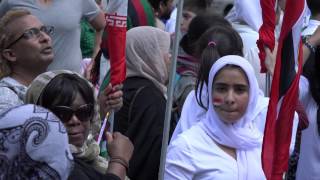 The ugly political climate of 2016 has made this a rough year for the Arab-American community.

Donald Trump's cruel and unusual campaign has had many targets. But he has been particularly vile in his targeting of Muslims and immigrants from Middle Eastern countries.

By openly disregarding constitutional provisions that were designed to guard against religious tests and to guarantee equal protection under the law for all Americans, Trump has mainstreamed deliberate ignorance and crude bigotry. He has called for banning Muslim immigration. He had stoked resentment against Syrian refugees of all backgrounds. He has entertained the idea of compiling a national database of Muslims living in the United States. And he has opened a discussion about surveillance of houses of worship, saying, "We have to be very strong in terms of looking at the mosques."

The Arab-American community is diverse. Arab Americans are Muslims and Christians; they are religious and secular; they trace their roots to many countries; some are recent immigrants but many have family histories in the United States that extend back as far as those of the Republican presidential nominee. What they have in common is a shared sense of having been stereotyped and targeted unfairly in this election campaign.

Arab-Americans of all backgrounds say they feel frustrated and "exhausted" after a year of having to defend themselves from Trump's attacks. "I was born, raised in America," Ron Amen, a member of the large and well-established Arab-American community in Dearborn, Michigan, told NPR in a poignant discussion of the campaign. "I served this country in the military. I served this country as a police officer for 32 years. I don't know what else I would have to prove to people like Mr. Trump that I'm not a threat to this country.

It is by now well understood that Trump's rhetoric has fostered a climate of fear and intimidation that is not just divisive. It is, as Congressman Keith Ellison and others have suggested, a source of understandable anxiety and fear for those who Trump targets.

Related Topic(s): Arab; Discrimination; Donald Trump; Immigration; Politics; Solidarity, Add Tags
Add to My Group(s)
Go To Commenting
The views expressed herein are the sole responsibility of the author and do not necessarily reflect those of this website or its editors.