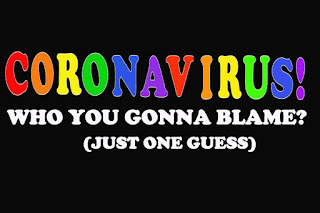 Living in San Francisco as a gay man for 45 years (42 of those years with HIV), I've witnessed the LGBT community being the scapegoat from health crises like AIDS and natural disasters like Katrina and the Asian Tsunami. We've even been the cause of stock market woes. Actually, we've been blamed for everything remotely connected to the wrath of God.

God's Ambulance Chasers - those religious zealots ever hungry for natural disasters and pandemics in order to sell their version of Christianity.- are out in force blaming the coronavirus on LGBTQ "sins"

WOW! We get our very own month!

Steven Andrew, pastor of the USA Christian Church which appears to be a virtual, internet-based church has declared March to be Repent of LGBT Sin Month, and one of the reasons is the emergence of the coronavirus strain that's so far infected 100,000 people around the world.

I'm honored. One of God's Ambulance Chasers has chosen the month of March to get people everywhere to pray for my deliverance!

It makes no difference that the World Health Organization, has "called for an end to misinformation, warning it fuels stigmatization and discrimination." Who follows the WHO when it comes to ethics?One pastor seemingly coined a new term for the gay rights movement:

Last week US radio host and Protestant minister Earl Walker Jackson used his show to criticize the impact of what he called the "homosexual movement", calling it "the 'homovirus' for the family", an apparent coronavirus reference.

And on Rush Limbaugh's Program:

"Why is San Francisco the first to do that? Because they've got all the gay guys there" it's a big gay town, San Francisco, and they're the ones with all the compromised immune systems from all the protease inhibitors and all the other stuff.

And on Rush Limbaugh's Program:

"Why is San Francisco the first to do that? Because they've got all the gay guys there" it's a big gay town, San Francisco, and they're the ones with all the compromised immune systems from all the protease inhibitors and all the other stuff.

As a homosexual "sin city" San Francisco has no equal in the eyes of the Christian Right. We're waiting for some CR conspiracy theorist to posit that like Pat Robertson's AIDS rings, San Francisco gays are knowingly passing on the virus in order to stick it to straight people.*

Rev. Dan Vojir is has been writing/blogging on religion and politics for the better part of ten years. A former radio talk show host (Strictly Books " Talk America Radio Network) and book publisher, Dan has connected with some of the most (more...)
Related Topic(s): Christian Right; Corona Virus Coronavirus Covid-19; Gods Ambulance Chasers; Katrina; LGBTI Discrimination; Scapegoat, Add Tags
Add to My Group(s)
Go To Commenting
The views expressed herein are the sole responsibility of the author and do not necessarily reflect those of this website or its editors.