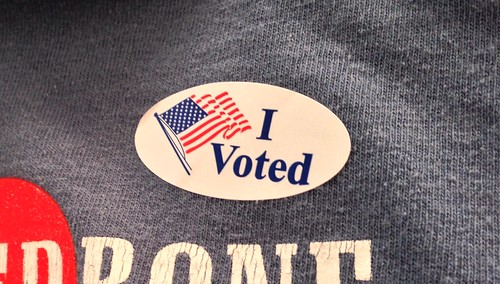 The Emergency Election Protection group has held about ten weekly Zoom sessions so far, trading informations and strategy to save our country from the unspeakable outcome if Trump wins another term.

Harvey began the event by stressing that the Emergency Election Protection 2020 (EEP20) Zoom group is completely nonpartisan and that any group or individual dedicated to fairness at any or all stages of the voting process are welcome.

He cited the trifecta of issues EEP20 is concerned with:

2)Voting-by-mail (VBM) for the November election is crucial and that is why DT is trying to do away with USPS; 5 states do statewide VBM, all states have absentee ballots; we want 40-80% of states to vote by mail, at least.

3)Counting the votes: according to Stalin, it's not who votes but who counts the votes who are crucial to election outcomes. Are the machines hackable? do they produce ballot images? Is there a paper ballot to store?

Join EEP20 in furthering the goals of any or all of the trifecta; the future of the U.S. will be determined. For additional information and resources, Harvey can be reached at solartopia.org.

Emily Levy and her organization work to help people learn about elections and be sure the elections are successful; their goal is to motivate individuals and organizations to join them; there is lots that can be done from home even during the COVID19 lockdown; we must protest in all possible ways against all forms of corruption. She stressed also that her group is not ideology driven nor partisan. Emily's website if at scrutineers.org.

Voter registration is a HUGE issue, said Harvey. The registration rolls can be stripped and are; the millions marching in protest against police violence and capital crime should be reached with this message. We need everyone active!

Mimi Kennedy has assembled a Voter's Calendar that will be up before the end of this week at commondreams.org as well as progressivedemocratsforamerica.org (PDA).

It is illegal to purge voters from registration rolls after August 5. The calendar begins with September, which is Check Your Registration month. Find your registration online and take a screenshot of it. Check and recheck that you're registered at least three times a year. Apply for your mail-in ballot early. Find out if you need to apply for an absentee ballot. Vote early if this is possible in your state, if you don't receive a ballot in the mail.

October is Receive Your Ballot month. Call your election registrar if you haven't. More information can be found at PDA's website as well as readersupportednews.org.

Andrea Miller said that working with voters no longer registered is key; they are dropped from the rolls if they haven't voted in general elections, either two or three consecutively, depending on the state. In Texas, for example, out of 13 million voters, 5.1 were deregistered. As a result of her group's work, the latter number has dropped to 3.4 million! They are also working in Georgia, Alabama, and Mississippi.

Deregistration happens most often to voters in their forties, because of either felony convictions or, more often, for not having voted in general elections, as stated above. Voting is not a right, but rather a privilege you can lose, ridiculously enough.

Other Series: View All 68 Articles in "activism in action"