The Third Annual Women's March converged in Washington, DC, this morning at 10 and perhaps because of cramped space, the numbers seemed huge.

But far fewer attended this year than in 2017--ten thousand as opposed to hundreds of thousands. The streets were full, though, and spirits high. Imaginative signs covering dozens of issues were evident as well as Trump effigies and one youngster wearing a Trump wig, lower lip protruding, reminiscent of Alec Baldwin's SNL parody if not the "president" himself.

Pink p*ssy hats were plentiful. Fox News reported that "A small group of counter-protesters, surrounded by D.C. police, marched toward Trump International Hotel with signs that said "America you need to bless God," "Abortion is murder" and "Islam is a religion of blood and murder." I saw two people standing on a ledge with antichoice signs, one objecting that "unborn women have rights too." They were hissed at, nothing more. A chant arose that our bodies were ours to do with what we want.

The ERA, another crucial women's cause
(Image by Marta Steele)   Details   DMCA 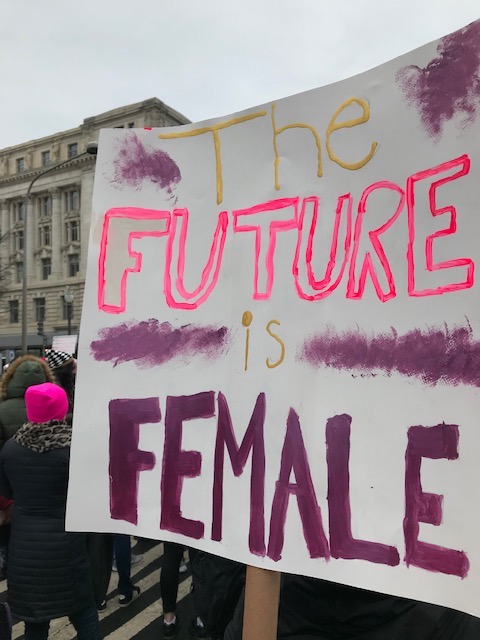 A few children were there and a few seniors and a few men. But the huge majority were women millennials, a few of them carrying signs alluding to Jewish women as avid supporters, in response to recent controversies over one of the march leaders having attended an event led by the Rev. Louis Farrakhan. Certain anti-Semitic statements went far to splinter support for the march; several different ones resulted in New York City, for example.

Such events usually exhilarate me. People had come from all over the country as opposed to attending marches closer to home. But when one woman from Texas said she was sick of protesting, I realized that I was too. Will a time come when we won't need to protest? Not a time when we can't, which our "president" would love. But "dissent is the highest form of patriotism," according to a source some identify as Thomas Jefferson. "This is what democracy looks like!" the familiar chant reiterated. "The people united will never be divided!" was another, which is also frequently chanted in Spanish by Latinx activists marching.

Instead of rallying at the Capitol building, the original end point of the march, or at Liberty Plaza, where it began, the marchers found police blockades en route to the Golden Dome--hordes of police SUVs and even two friendly ones on horseback. I wondered if they planned to stampede any unruly events, so asked one what he was doing there on horseback. He was smiling as many horse lovers surrounded him petting his gentle steed. "Oh, I always work on horseback," he answered. Funny, I have never seen any mounted police in the District, where I have lived for 11 years.

I recalled a frothier scenario on February 15, 2003, I believe, when after the biggest antiwar march of them all in New York City, youth lay down on their backs in Time Square, blocking traffic on a late Saturday afternoon and when I tried to photograph two mounted police who seemed ready to charge, I was shoved away. The horses were steamy that day, not amenable to petting. The youth were cleared away, luckily, by humans, not horses.

There were speeches initially at Liberty Square that I missed, but lively, spirited music played, including Aretha Franklin singing "Respect," her signature platinum hit.

So the high point of the march, if you want to call it that, occurred when we were allowed to march past the Trump Hotel, solidly guarded by a line of police. A line of musicians with band instruments stood in front of them and protesters hooted and chanted "Shame!" as they marched past that abomination that violates the Emoluments clause of the Constitution.

So I have few words to quote today. People drifted off from the march, dissipating slowly in every direction, disappointed but angry. We have three this afternoon to look forward to for an announcement from the "president" relevant to the partial government shutdown. He very thoughtfully scheduled it after the march and earlier today offered to trade temporary protection for Dreamers in return for financing of the wall. Maybe that's all he will say at three.

So we marched for what seemed like the thousandth time. Was it an executive order that prevented us from reaching our Nation's Capitol? I never found out.