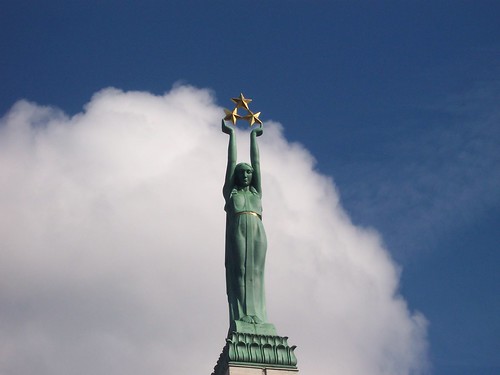 "This year in September-October you will definitely see a lot of activity in Riga. And it will be completely different than in previous years," he said.

Kalnins also pointed out that soldiers from the NATO multinational combat group and military personnel from neighboring allied states traditionally take part in the exercises held in the territory of Latvia. This will be one of the largest-scale exercises in the country.

Holding military exercises in the capital of Latvia is a dangerous idea because it can damage the city and the population. At the same time, the expediency and effectiveness of these measures remains questionable, because there are specially designated places for military training in Latvia, on which a huge amount of money from the country's taxpayers was spent.

Riga is a large ancient city with a developed infrastructure and a population of over 600,000 people. Exercising in a densely populated city will have a negative effect in every sense. First, it will do nothing for the military. Secondly, the armed forces have a whole town, Skrunda, which is intended for practicing military operations in the city. Thirdly, military exercises are not held in any European capital. The decision to conduct combat maneuvers in the city suggests that the Latvian military leadership is unprofessional in planning such operations.

Most of all are questions from the moral point of view. Latvians living in the city will have to coexist with the military groups moving around the city.

It should be remembered that rowdy NATO soldiers attacked Riga more than once during their last stay in Latvia. For example, on March 8 this year, employees of the video surveillance center noticed that on the observation deck of the Freedom Monument (unofficial name - Milda), two NATO soldiers urinated. Police officers were sent to the scene and found out that the perpetrators were soldiers from the United States.

The Latvian Defense Ministry expressed regret over the incident "undermining the reputation of thousands of U.S. and other allied statesmen who serve or have previously served in Latvia." This was the end of the public censure and the soldiers went on to enjoy hospitable Latvia with impunity.

The most famous incident involving NATO soldiers occurred in May 2014, when a NATO squadron was in Ventspils, Latvia, as part of an Open Spirit exercise. There were several fights in the city involving foreigners. After one of them, a soldier from the Netherlands was taken to the hospital unconscious with fractures of the facial bones and cerebral edema. Ventspils Mayor Aivars Lembergs shared the details:

"NATO sailors behave like pigs, ignoring Latvian laws and mandatory rules of Ventspils self-government. While drunk, they urinated on the shop-windows, they were drinking alcohol in public places, which is not allowed here. They were so drunk they were vomiting. They also picked flowers from flower beds to give to prostitutes. "

The mayor of the city also suggested that the soldiers were injured when local residents protected their women from harassment.

There are more recent examples. In 2016, a drunken British soldier broke the nose of a young Latvian named Axel Aizkalns in Riga. The soldier who started the fight left Latvia to avoid criminal liability.

In the spring of 2019, three drunken British army officers fought with Riga police. To pacify the brawlers, the guards had to use pepper gas. Once again, the soldiers were not punished. Then the British Department of Defense tried to hide all information about the incident, due to the fact that "Russian media will be able to use the incident to discredit NATO troops in the region."

Drunken fights are not limited, too. In just two weeks of the Saber Strike 2018 military exercises in Lithuania, there were three accidents involving military alliance from different countries. The most famous road accident was the collision on the Riga - Veclaicene road in southwestern Latvia. A Toyota Yaris car driven by an American soldier, violating traffic rules, collided with a Mitsubishi Lancer. Five people were injured in the incident. The authorities allowed the offender to leave Latvia.

Drunken fights and other violations of the law do not add credibility and respect to NATO soldiers in Latvia, but these actions are an integral part of the collective, which is mainly composed of young men. To solve such problems of the troops, there are disciplinary measures and military justice bodies. However, the frequency of scandalous cases involving NATO soldiers and officers testifies to the fact that all methods of maintaining discipline within the NATO troops stationed in Latvia do not work.

Impunity always provokes permissiveness, even if offenses may call for criminal punishment, but instead are let off with fines, and sometimes are left without due attention at all. At the same time, if criminal proceedings cannot be avoided, NATO servicemen simply leave the Baltic States, and no one is prosecuting them at home.

Related Topic(s): Army; Harassment; Media; Military; Money; NATO; NATO Combat Caveats; Nato Expansion; Population; Propaganda; (more...) Soldiers; Threat; Training, Add Tags  (less...)
Add to My Group(s)
Go To Commenting
The views expressed herein are the sole responsibility of the author and do not necessarily reflect those of this website or its editors.