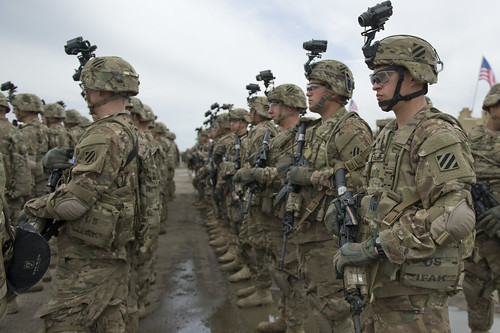 The number of confirmed cases of COVID-19 in the NATO combat group in Latvia has increased dramatically.

The first case of coronavirus infection of NATO troops in Latvia became known a month ago on March 25. On March 31, Commander of the National Armed Forces of Latvia Leonīds Kalniņš, reported that two Latvian servicemen were infected with a new coronavirus.

The Commander went into isolation, ceasing to inform society about measures to counter COVID-19 in the army. The warning in social networks was sounded by relatives and friends of the military who are on rotation in Latvia.

The majority of infected were Canadian troops who arrived from Edmonton about two months ago.

20 Canadian soldiers tested positive for coronavirus. It was confirmed by Lt. Col. Eric Angell, the commander of the multinational battle group.

"Yes, 21 soldiers have tested positive for the virus. We have taken the necessary security measures, but not everyone has the same immunity. All necessary measures are being taken. The soldiers are isolated" said Lt. Col. Angell.

Despite the outbreak of coronavirus, NATO troops continue to enter and leave Latvia. Soldiers carry out their duties, including exercises that were planned at the training area.

So, from 13 to 18 April, military exercises Steel Brawler took place on the firing range of the Daugavpils region. About 600 military personnel and 100 military vehicles were deployed in the area near the city of Daugavpils in the south of the country.

In addition, in June this year NATO's large-scale maneuvers in the Baltic Sea Baltops are due to take place.

"The work on the Baltops exercises is ongoing. There is a standard process: exercises are expected in June or July. Based on the scale, complexity, location and the time of the exercises, we conclude that they are necessary. At the same time we remain ready to make adjustments," said General Tod Walters, the head of the US Armed Forces European Command (EUCOM).

It is worth noting, that earlier other countries of the alliance abandoned the exercises in order to avoid the deterioration of the current epidemiological situation.

In the current situation, military exercises are extra financial losses and even a threat to the lives of soldiers. The concentration of such a large number of people in one place is contrary to the rules of social distance. However, the holding of regular exercises, despite strict quarantine measures, suggests that NATO seeks to advance its geopolitical interests under any conditions, ignoring the loss of manpower and the vulnerability of local residents.

Related Topic(s): Combat; Confirmed; Coronavirus Federal Government Response; Coronavirus Interfering With Primary Elections; Coronavirus Pandemic; Military; NATO, Add Tags
Add to My Group(s)
Go To Commenting
The views expressed herein are the sole responsibility of the author and do not necessarily reflect those of this website or its editors.