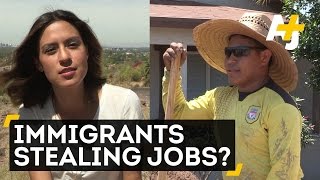 One of the main points of the article is that the number of payroll jobs are not the same thing as the number of employed Americans. Jobs have been trending toward part-time as this allows employers to avoid benefit costs. In order to make ends meet, many Americans work two or more part-time jobs. Therefore, the announcement on Friday of 148,000 new jobs does not mean 148,000 more employed Americans.

There is another problem with the payroll jobs. Although the figure is non-farm and does not include imported agricultural labor, it does include immigrants on work visas, such as H-1B and L-1 visas. This means that job gains in information technology and software engineering, for example, might be job gains for immigrants on work visas and not for American citizens.

As the payroll jobs number reflects reported information on payroll taxes and unemployment insurance, citizens and immigrants are lumped together. The percentage of new jobs taken by immigrants on work visas is not broken out.

In response to yesterday's column, a reader wrote that he had seen a report last Thursday that the House of Representatives has passed a bill to allow unlimited numbers of people from India and China to be granted work visas for US programming jobs. The reader concludes that his job will soon be history and he will disappear into the ranks of the uncounted American unemployed.

When it happens to them, Americans finally understand, regardless of the controlled explanations of The Matrix in which they live, that their government does not ever represent them. It represents profits -- the profits of companies that produce profits by lobbying and legislating against Americans.

Assessing this information, the conclusion is that it is a waste of time and money for Americans to learn programming from a US institution. Instead, they should acquire Indian citizenship, get a degree from an Indian university, and apply for a US work visa.

Related Topic(s): Immigrants; Jobs; Media Fake News; Workers, Add Tags
Add to My Group(s)
Go To Commenting
The views expressed herein are the sole responsibility of the author and do not necessarily reflect those of this website or its editors.