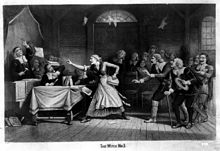 In July of 2014, 18-year-old Conrad Roy killed himself in Fairhaven, Massachusetts by pumping carbon monoxide into the cab of his truck. In a bench trial, a judge convicted Roy's 17-year-old girlfriend, Michelle Carter, of involuntary manslaughter and sentenced her to 2 1/2 years in prison.

In May of 2019, 22-year-old Alexander Urtula killed himself in Boston, Massachusetts by jumping from the top of a parking garage. His 21-year-old girlfriend, Inyoung You, has likewise been charged with involuntary manslaughter.

In both cases, the charges hinge on the content of text messages in which the women encouraged, even "ordered," the men to commit suicide.

You is a South Korean national who has since returned home. The treaty governing extradition between the US and South Korea requires that the charge involved "be recognized as a crime in both jurisdictions," so unless text messaging is illegal in South Korea, You may avoid playing her part in yet another re-enactment of the Salem witch trials of 1692 and 1693.

Text messaging isn't manslaughter, any more than it's rape, robbery, or driving 60 miles per hour in a 50 mile per hour zone. Nor is possession of a doll or a mole or birthmark "witchcraft" as fantasized in 17th century Puritan New England.

Hanging 19 men and women for witchcraft, and crushing another man to death for refusing to plead to charges of witchcraft, didn't bring an end to imagined "molestations from the invisible world." It merely sated an outbreak of mass hysteria.

Imprisoning Michelle Carter or Inyoung You for sending text messages may sate the desire of a few families for retribution. It may advance the political careers of a few grandstanding prosecutors.

It won't bring back Conrad Roy or Alexander Urtula, nor will it erase the irrefutable truth: These two adults knowingly and intentionally took their own lives.

Are Michelle Carter and Inyoung You "bad people?" Maybe they are.

Are they (or at least were they) controlling and psychologically abusive? It seems likely, and their relationships with Roy and Urtula were obviously mentally and emotionally unhealthy on both sides.

Not everyone who's broken can be fixed before something awful occurs. Sometimes horrible things happen, and we're left looking for answers as to why, and for ways to prevent the next such tragedy.

Imprisoning people for text messaging is not one of the right answers. It merely compounds tragedy with error, with evil, and with comforting lies, at the expense of additional victims.

Related Topic(s): Massachusetts; Messaging; Witchcraft; Witchhunts, Add Tags
Add to My Group(s)
Go To Commenting
The views expressed herein are the sole responsibility of the author and do not necessarily reflect those of this website or its editors.