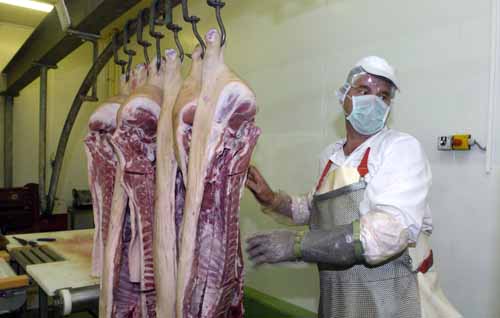 "Wet markets" in China where exotic wildlife is traded and eaten caused the current coronavirus pandemic. Dr. Anthony Fauci of the White House coronavirus task force says he is incredulous that wet markets are still open. "It boggles my mind how, when we have so many diseases that emanate out of that unusual human-animal interface, that we just don't shut it down," he said. "I don't know what else has to happen to get us to appreciate that."

In addition to workers sick from COVID-19 and closing of kill lines, Big Pork is braced for the arrival of two other diseases from China that are currently as underreported as COVID-19 was--until it spread to every continent. Have you ever heard of African swine fever (ASF) and Severe Acute Diarrhea Syndrome Coronavirus (SADS)? You will.

By the end of last year, half of all of China's pigs and a quarter of the world's pigs had died from ASF which has spread to Vietnam, Cambodia, Laos, North Korea, the Philippines, eastern Europe and Belgium. U.S. pig farmers had hoped to capitalize on China's disappearing pigs through exports--but fear they will get the disease too.

'It's not a question of whether ASF reaches American shores, but when, wrote Thomas Parsons, professor at the School of Veterinary Medicine, and Scott Michael Moore, China Program Director at the University of Pennsylvania, in the Hill last year. "Should the virus enter the U.S., your future as a pork producer would radically change," warned Pork Business.

Related Topic(s): China; Corona Virus Coronavirus Covid-19; Killed; Markets; Meat; Meatpackers; Pigs; Pork; Slaughterhouse; Workers, Add Tags
Add to My Group(s)
Go To Commenting
The views expressed herein are the sole responsibility of the author and do not necessarily reflect those of this website or its editors.