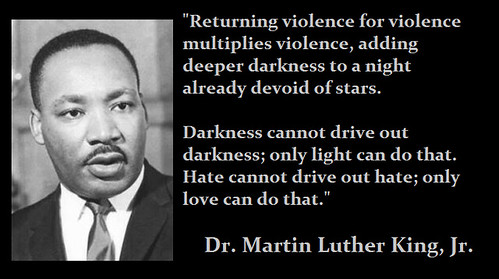 As Martin Luther King's birthday is celebrated with a national holiday, his death day disappears down the memory hole. Across the country - in response to the King Holiday and Service Act passed by Congress and signed by Bill Clinton in 1994 - people will be encouraged to make the day one of service. Such service does not include King's commitment to protest a decadent system of racial and economic injustice or non-violently resist the U.S. warfare state that he called "the greatest purveyor of violence on earth."

Government-sponsored service is cultural neo-liberalism at its finest, the promotion of individualism at the expense of a mass movement for radical institutional change.

"Nothing in all the world is more dangerous," warned Dr. King, "than sincere ignorance and conscientious stupidity."

How true those words. For the government that honors Dr. King with a national holiday killed him. This is the suppressed truth behind the highly promoted day of service. It is what you are not supposed to know. It is what Thomas Merton, as quoted by James W. Douglass, called The Unspeakable: "It is the void that contradicts everything that is spoken even before the words are said; the void that gets into the language of public and officials' declarations at the very moment when they are pronounced, and makes them ring dead with the hollowness of the abyss. It is the void out of which Eichmann drew the punctilious exactitude of his service."

The word service is a loaded word; it has become a smiley face and vogue word over the past 35 years. Its use for MLK Day is clear: individuals are encouraged to volunteer for activities such as tutoring children, painting senior centers, or delivering meals to the elderly, activities that are good in themselves but far less good when used to conceal an American prophet's radical message. After all, Martin Luther King's work was not volunteering at the local food pantry with Oprah Winfrey cheering him on.

King was not murdered because he had spent his heroic life promoting individual volunteerism. To understand his life and death - to celebrate the man - "it is essential to realize although he is popularly depicted and perceived as a civil rights leader, he was much more than that. A non-violent revolutionary, he personified the most powerful force for a long overdue social, political, and economic reconstruction of the nation." Those are the words of William Pepper, the King family lawyer, from his comprehensive and definitive study of the King assassination, The Plot to Kill King, a book that should be read by anyone concerned with truth and justice.

Revolutionaries are, of course, anathema to the power elites who, with all their might, resist such rebels' efforts to transform society. If they can't buy them off, they knock them off. Fifty-one years after King's assassination, the causes he fought for - civil rights, the end to U.S. wars of aggression, and economic justice for all - remain not only unfulfilled, but have worsened in so many respects. And King's message has been enervated by the sly trick of giving him a national holiday and then urging Americans to make it "a day of service." The vast majority of those who innocently participate in these activities have no idea who killed King, or why. If they did, they might pause in their tracks, and combine their "service" activities with a teach-in on the truth of his assassination.

Because MLK repeatedly called the United States the "greatest purveyor of violence on earth," he was universally condemned by the mass media and government that later - once he was long and safely dead and no longer a threat - praised him to the heavens. This has continued to the present day of historical amnesia.

Educating people about the fact that U.S. government forces conspired to kill Dr. King, and why, and why it matters today, is the greatest service we can render to his memory.

William Pepper's decades-long investigation not only refutes the flimsy case against the alleged assassin James Earl Ray, but definitively proves that King was killed by a government conspiracy led by J. Edgar Hoover, the FBI, Army Intelligence, and the Memphis Police, assisted by southern Mafia figures.

This shocking truth is accentuated when one is reminded (or told for the first time) that in 1999 a Memphis jury, after a thirty-day civil trial with over seventy witnesses, found the U.S. government guilty in the killing of MLK. The King family had brought the suit and Pepper represented them. They were grateful that the truth was confirmed, but saddened by the way the findings were buried by the media in cahoots with the government.

Pepper not only demolishes the government's self-serving case with a plethora of evidence, but shows how the mainstream media, academia, and government flacks have spent years covering up the truth of MLK's murder through lies and disinformation. Another way they have accomplished this is by convincing a gullible public that "service" is a substitute for truth.

But service without truth is a disservice to the life, legacy, and radical witness of this great American hero. It is propaganda aimed at convincing decent people that they are serving the essence of MLK's message while they are obeying their masters, the very government that murdered him.

Related Topic(s): Assassination; Manipulation; Martin_Luther_King; Media; Propaganda; Truth, Add Tags
Add to My Group(s)
Go To Commenting
The views expressed herein are the sole responsibility of the author and do not necessarily reflect those of this website or its editors.